“We are not criminals. We are human beings who have rights like any person.”

This is the postscript of a three-page letter written by 29 trans and gender nonconforming migrants being held at the Cibola County Correctional Center in Milan, New Mexico, about 80 miles west of Albuquerque.

The signatories—who live in a unit reserved exclusively for trans detainees at the privately run facility—call for the media and international and national organizations “committed to civil liberties and to the LGBTQ community” to raise awareness about what they say are widespread abuses and to investigate their living conditions.

The handwritten letter, dated June 26, accuses medical staff of failing to provide adequate care for people with disabilities, HIV-positive individuals, and detainees with skin infections. It also describes daily verbal and psychological abuses from officers, and a fear of retaliation in response to complaints.

“We are dismayed by the worrying circumstances that we are living in,” the detainees wrote. “We are afraid of reprisals, but we are more afraid of being in this situation.”

The letter was received by Trans Queer Pueblo, a Phoenix-based LGBTQ migrant advocacy group that has worked with many individuals fleeing persecution for their sexual orientation or gender identities in their home countries and enter Arizona across its southern border with Mexico.

Some among the Cibola detainees were part of a larger group traveling overland from Central America who were targets of a politically charged, anti-immigrant campaign starting in 2018, even before their arrival in the United States. 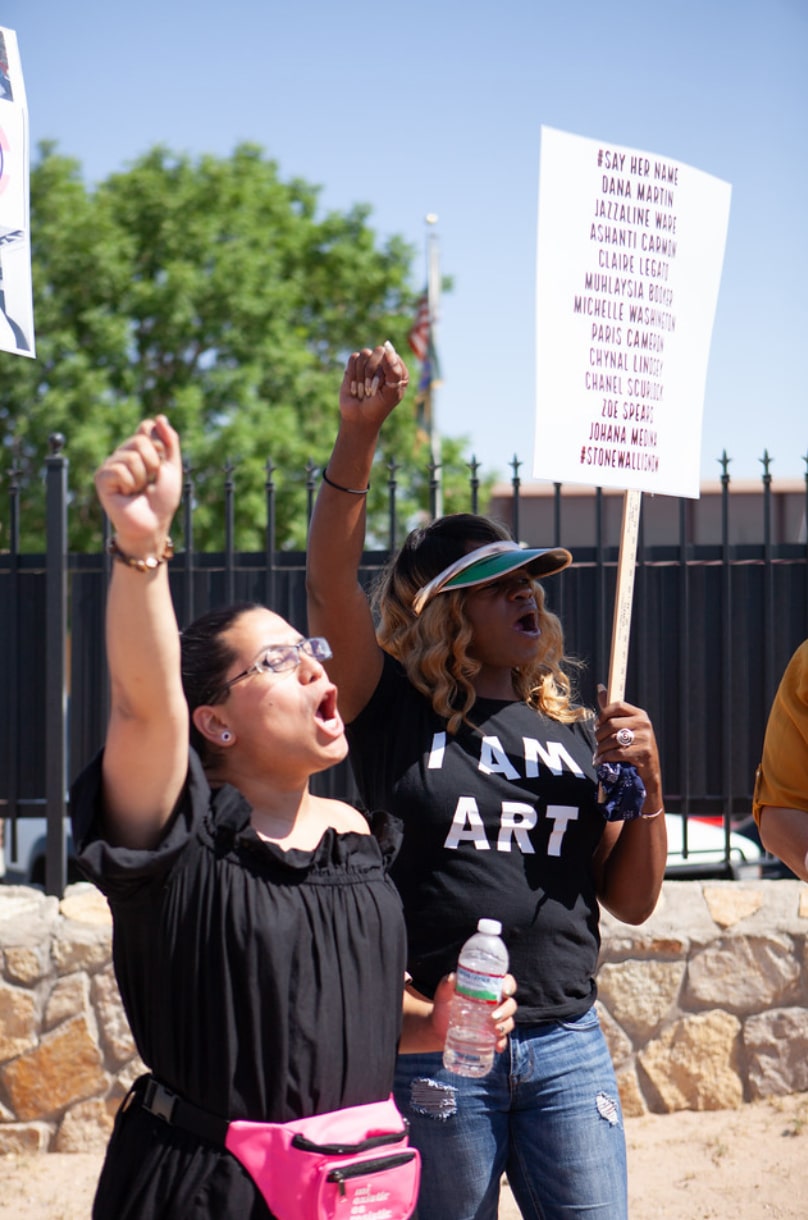 Described as “caravans” of migrants, the groups—including hundreds of Hondurans, Salvadorans, Guatemalans, Nicaraguans, and Cubans—were characterized as a security threat to the United States and as justification for increased federal spending on border fortification.

In July 2019, as this article was being prepared for publication, a federal judge in California had blocked implementation of a new rule announced that same month by the U.S. Departments of Justice and Homeland Security to bar all migrants from requesting asylum at the border.

Under the new “safe third country” asylum rule, the U.S. government would require all asylum seekers to make petitions for refuge in the country through which they transit en route to the U.S.

The United States—a signatory to provisions of the 1951 refugee convention, an instrument of international humanitarian law—is obliged to recognize the right to claim asylum of anyone crossing its borders as a result of a well-founded fear of persecution in their home country.

It has a long history as a leader in refugee resettlement, providing safe shelter to, for example, hundreds of thousands of Europeans displaced by World War II and those escaping from Communist regimes in Europe and Asia during the Cold War.

While there are no published current official numbers of LGBTQ asylum seekers crossing the U.S. southern border annually, lawyers and activists estimate there are at least hundreds, including those fleeing high levels of transphobic and homophobic violence in Central America.

As of February 2019, there were at least 111 “self-identified transgender individuals” in the custody of U.S. Immigration and Customs Enforcement (ICE) at 20 facilities across the United States, according to data obtained by U.S. LGBTQ news service Washington Blade.

“They’re running from societies that perpetuate violence, but perhaps they might encounter the same thing in the U.S., and other forms of harassment and discrimination,” says Alma Rosa Silva-Bañuelos, who works as a community organizer and with trans Cibola detainees as TransLatin@ Coalition’s rapid response coordinator.

TransLatin@ Coalition and the Transgender Resource Center of New Mexico help connect individuals to legal advice and social services while in detention, and coordinate post-release assistance, including housing, hot meals, transportation, and clothing.

In May 2018, Cibola detainee Roxsana Hernandez Rodriguez, a 33-year-old transgender woman seeking asylum from Honduras, was rushed to a local hospital, where she died with symptoms of pneumonia, dehydration, and complications associated with HIV, according to an independent autopsy.

“We have been demanding the release of our trans communities detained in ICE detention centers because of rampant physical and brutal treatment from guards and other detainees,” says Jorge Gutiérrez, executive director of Familia: Trans Queer Liberation Movement.

In August 2018, Familia joined other groups—including Transgender Law Center, Black LGBTQ+ Migrant Project, and Translatin@ Coalition—at a rally in front of the federal courthouse in Albuquerque to protest the death of Roxsana Hernandez.

Silva-Bañuelos—who uses they/them/theirs pronouns—considers it their duty to advocate for trans detainees.

“I was born into this work,” they say. “This is my community. … As a two spirit [Mexica Azteca] healer, I don’t have a choice.

“I feel honored and privileged to be able to sit with each woman who comes out of Cibola,” they continue. “I try to bring humanity back to them, on the inside, and when they’re released.”