Seated in rows for Sunday morning service at the Unity Fellowship church in southeast Atlanta, Georgia, on September 27, 2015, the congregation, expecting to hear a well-known repertoire by a visiting choir, was greeted by the Janelle Monáe-penned protest song “Hell You Talmbout.”

The 12-member choir-turned flash mob sang out with call-and-responses, naming some of the scores of black Americans killed by police officers, an unrelenting pattern whose persistence was continually condemned through 2015 and into 2016 by the Black Lives Matter movement.

The singing was followed by a litany, written and delivered by trans activist and media maven Raquel Willis.

“We pray for a world where we are not confined by our economic standing and our bodies aggressively policed…We pray for an end to…all state-sanctioned violence. We pray for an improvement of all life chances. Heal us and bring us to unity. Lord, hear our prayer.”

“There was a real spark,” says flash-mob member Jardyn Lake, 30, the Atlanta organizer for the Black Alliance for Just Immigration and a board member of Southerners on New Ground. “We were black, radical, queer, and trans people, bringing critical black, queer, and trans issues, as well as poverty and police violence, to the center of the pulpit instead of the margins. As queer black people, it felt good to be celebrated in the church instead of being demonized.” 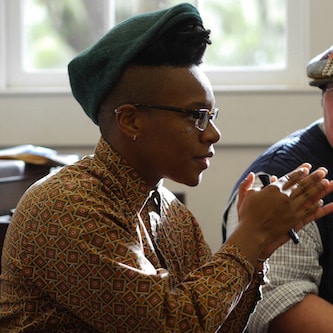 Brought up within the fundamentalist Church of Christ in Jacksonville, Florida, Lake had never found a home there, because of the brute and shaming messages of homosexuality as a sin and a sickness. “As a black queer person in a hostile white southern city, it was very confusing,” Jardyn says.

The plan to “flash mob” the diverse and welcoming Unity service was hatched during a weekend-long workshop in Atlanta that explored activism and creativity as part of an initiative by the New York–based Auburn Theological Seminary.

The initiative, called the Sojourner Truth Leadership Circle, was conceived by Auburn Vice President Lisa Anderson to support and heal black women leaders of faith—who have been at the core of U.S. social movements for decades but have often been overlooked or sidelined.

“When people put on the vestments of the churches and synagogues and other religious institutions, they are donning the power of those institutions,” says Anderson. “For so long, so many folks have been kept out and prevented from wearing those robes.”

The Sojourner Truth circle is part of a growing undercurrent within the world’s major religions that is pushing against established hierarchies and scriptures and creating LGBT-inclusive churches, mosques, and synagogues.

One effect of this shift was evident in Pope Francis’ reiteration in June 2016 that he opposes anti-LGBT discrimination. His comments came amid a decisive shift in Catholic laypersons’ acceptance of LGBT equality and just a few weeks after Colombia, in April 2016, became the eleventh predominantly Catholic country to legalize same-sex marriage.1

Earlier during 2016 however, the Anglican Communion, representing 85 million Christians, voted by a margin of two-thirds to censure its U.S. affiliate, the Episcopal Church, from voting or decision-making for three years as a result of its acceptance of same-sex marriage.

In a growing number of seminaries and institutions of learning within the Abrahamic faiths and beyond, clergy and other scholars also have been reinterpreting traditional liturgy in a more inclusive light.

“There’s nothing in the Quran that says you can’t be Muslim and gay,” says Imam Daayiee Abdullah, founder and executive director of the Washington D.C.–based Mecca Institute, an online Islamic seminary that aims to graduate 100 “inclusively trained” chaplains by 2022.

“There are many aspects of the Quran that talk about mates, partners, and spouses. The actual language itself does not identify gender,” says Abdullah, who performed his sixty-fourth same-sex wedding in November 2015.

However, resistance to the acceptance of homosexuality and gender diversity remains strong in many Muslim communities around the world and LGBT people have experienced fresh crackdowns during the last year even in countries, such as Turkey, which had previously held more inclusive traditions.

In Indonesia, with no history of same-sex criminalization, the highly influential Ulema Council in March 2015 issued a fatwa calling for same-sex behavior to be punished by caning. After a series of anti-gay denunciations by officials in 2016, Human Rights Watch called on President Joko Widodo to stand by his promises to defend human rights.

All of the eight countries or territories in the world that call for the death penalty for homosexuality are either predominantly Muslim or hold Muslims to rules codified under Sharia law.

Under increasing pressure to investigate anti-LGBT discrimination worldwide, the U.N. Human Rights Council in June 2016 voted—narrowly—to establish the position of LGBT independent expert. It did so despite opposition from its Muslim member states,2 as well as Russia and China.

Pro-LGBT religious activists calling for a halt to homophobic and transphobic discrimination and violence also raised their voices earlier in June after the massacre at the Pulse nightclub in Orlando, Florida.

The shooting, which stole the lives of 49 people, led to an unprecedented show of unity between the city’s, and nation’s, Muslim and LGBT communities, with a statement of solidarity signed by Muslims for Progressive Values among 65 other groups.

Healing the emotional and physical trauma—whether recent or centuries old—that legal and institutional rejection has cast on people with nonconforming sexual orientations and gender identities is a hope that continues to drive Anderson’s work through the Auburn Seminary.

“Every time we train ourselves to breathe new life into traditions, to write new stories, to be in new relationships, I feel like we begin to…remake ourselves at the cellular level,” she says.

“We need our world to pivot around the values that lift us all up and that count us all as precious and beloved.”


2 With the exception of Albania.