With LGBT protections coming under increasing threat in the United States as a new governing and policy-making environment took shape during the first half of 2017, a growing movement is uniting to challenge the reversal of gains made in recent years.

In July 2017 the administration declared its intent to end open transgender service in the military on the same day that it argued in court that laws against sex discrimination in the workplace do not cover sexual orientation, contradicting federal policies of recent years.

“The scope of their assault is breathtaking,” he says.

The proposed reversals came just weeks after a May 2017 federal circuit-court decision in favor of a 17-year-old transgender Wisconsin student who had challenged his school district’s demand that he use a girl’s restroom. 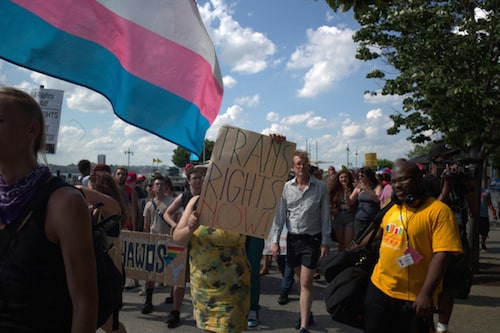 “This federal court decision …will touch any school function that has federal funding, including restrooms, locker rooms, and dorms,” says Flor Bermudez, director of the Transgender Law Center’s Detention Project.

A crucial test of LGBT equality under the law — whether business owners can deny services to people based on their own religious beliefs — will be taken up in 2017 by the U.S. Supreme Court in the case of a Colorado baker who refused to make a wedding cake for a male couple.

“Anxiety and fear have built around LGBTQ visibility, which represents for some that things aren’t the way they used to be,” says Marisa Franco, executive director of Mijente, which serves Latinx people nationwide. “Unmasking of racism, sexism, and anti-immigrant fervor is at a peak.”

Arrests of undocumented immigrants, having reached unprecedented levels under President Obama, increased by more than 38 percent, to more than 41,000 people, both with and without criminal convictions, during the first three months of the Trump administration.1

A grassroots recipient of the Transforming Movements Fund, Mijente in 2017 issued guidelines to activists working to establish or expand the scope of “sanctuary cities”—some 300 of which have already restricted their local law enforcement agencies’ compliance with federal agents seeking to identify undocumented residents.

Among eight recommendations in the Mijente guidelines document, Expanding Sanctuary, is for cities to support trans and gender-nonconforming immigrants in finding employment as one way to reduce reliance on informal-sector work, which increases the risk of arrest or detention.

“Louisville has a fairness ordinance protecting LGBT employees, but LGBT immigrants, especially trans people, are far more likely to come into contact with the police,” says T. Gonzales, a Houston-born transgender social worker and leader in the local sanctuary campaign.

Mijente’s guidelines have been used by activists in more than 100 cities, including Louisville, where the organization helped push the Jefferson County School System board to approve a “safe-haven” measure, committing it to protecting undocumented students from inquiries by Immigration and Customs Enforcement (ICE).

A citywide sanctuary policy has been more elusive in Louisville, and Gonzales spent two weeks in May 2017 handing out fliers at the Kentucky Derby, encouraging visitors to support the sanctuary campaign.

“Current immigration policies are a particular risk for many workers at the Derby,” Gonzales says. “They’re scared to leave the confines of the track because of uncertainty over whether they’ll come into contact with ICE, even if they haven’t committed a crime.”

Gonzales emphasizes that Louisville’s resolution must go beyond proclaiming the city “welcoming to all” and address “police profiling around race, religion, and gender identity that results in too many people having criminal records and that tears families apart.”

Another city where activists are pushing for stronger immigrant-protection policies, Madison, Wisconsin, has been the site of a multifaceted collaboration to oppose what they call “over-policing” of people of color, including trans people and immigrants, for poverty-related crimes like shoplifting and sex work.

“The constant discrimination can be both overt and subtle,” says M. Adams, who, as a gender-nonconforming graduate of the University of Wisconsin–Madison, was once turned down for a job in a local clothing store despite performing well at a sales audition. 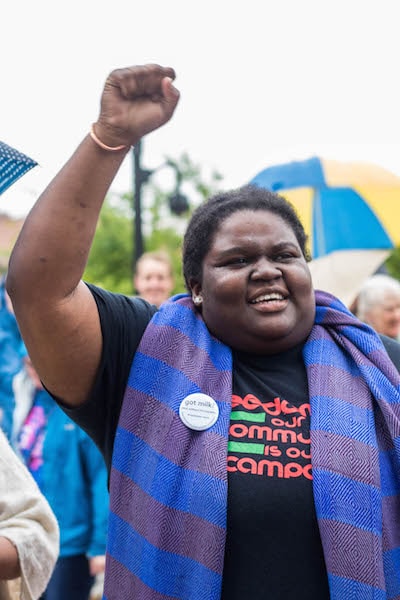 She was informed that the store preferred to hire women who would best model its “feminine” lines.

Now co-director of Freedom Inc., an anti-violence organization also funded through the Transforming Movements Fund, Adams is shining a spotlight on the stark gap between the size of the city’s Black population and the number of Black inmates in its jails.

If not for discriminatory policing and sentencing, says Adams, only 50 of the 800 inmates at the local prison would be Black, in proportion with Madison’s six percent Black population. However, approximately one half of the total prison population, or 400 inmates, are Black.

“People don’t randomly wind up in jail,” she says, explaining how the disproportionality led Freedom, Inc. to launch the Free the 350 campaign, which brought together the city’s Black, Hmong, and Cambodian communities, including their LGBTQ members, and other allies.

In 2016, the campaign, which involved three years of public debates, community meetings, media interventions, direct actions, and petitioning, claimed a victory when Madison’s Dane County Board of Supervisors voted down plans to construct a new jail.

Says Adams, preventing the addition of new prison beds—which the city is then pressured to fill to justify their investment in a jail—is an important step toward halting mass incarceration.

“My people survived slavery,” she says. “We beat Jim Crow. We’ve built our numbers by stretching across movements, and now our work is about reimagining how things could be different entirely.”