Muhsin Hendricks,
imam and founder of
The Inner Circle

Bullied at home, at school, and in the workplace, Khartini Slamah blamed God for giving her a male body which led those around her to misgender her. “My father wanted me to become a perfect boy… Being Muslim and transgender was not easy at that age. It’s still not easy.”

Born in a small village in Sarawak, on the Malaysian part of the equatorial island of Borneo, Khartini grew up under Malaysia’s highly intertwined state and Islamic laws, although Christians outnumber Muslims in her region, and indigenous religions are widely practiced.

“Religious anti-vice units target transgender women in my country. They use the Sharia law to arrest us for cross-dressing or harass us for having a condom, suspecting we’re in prostitution,” she says.

Now 53, Slamah is known for her work as an activist and advocate for people with HIV, in spite of an ongoing anti-LGBT clampdown. “The situation for transgender women in Malaysia is moving backwards,” she says. “We don’t see the light yet because we are being criminalized.”

Although half of Malaysians surveyed for the 2016 ILGA Global Attitudes Survey1 found it unacceptable for a male child to dress as a girl, only 35 percent agreed that being LGBTI should be a crime, and 54 percent said that bullying of LGBT young people is a significant problem.

Slamah was one of more than 20 participants at a November 2016 gathering, in South Africa, of LGBT Muslims from Southeast Asia, Africa, and North America, which explored a wide range of experiences with the aim of creating strategies to increase acceptance.

While LGBT-supportive Muslim groups, such as South Africa–based The Inner Circle and Muslims for Progressive Values in the United States, are growing and thriving, in some of the world’s 49 Muslim-majority countries—particularly those in the Middle East—conditions are worsening, according to the Organization for Refuge, Asylum & and Migration (ORAM).

ORAM’s helpline received record numbers of calls and emails in 2016 and early 2017, mostly made by gay men from Pakistan to Egypt to Morocco. Grassroots organizations in countries such as Egypt are able to offer little help beyond referrals for temporary accommodation.

“The level of desperation is palpable. People see fewer choices for leaving their countries because the world is closing up,” says Neil Grungras, ORAM’s executive director. “Only upper-class LGBT people, such as those who are able to study abroad, can leave a place like Malaysia.”

Grungas estimates that some 250 Syrian and as many as 900 Iranian refugees in Turkey have identified themselves as LGBT—a high-risk status that entitles them to expedited processing by the United Nations refugee agency.

Yet, many are unlikely to be resettled as a result of U.S. refugee quota cuts and increased anti-immigrant sentiment within traditional refugee-receiving countries, combined with the needs of millions fleeing the war in Syria.

The societal persecution driving some LGBT refugees to flee their homes is also underscored by death penalty statutes for same-sex relations—although not always implemented—in all or part of 132 Middle Eastern and African countries. 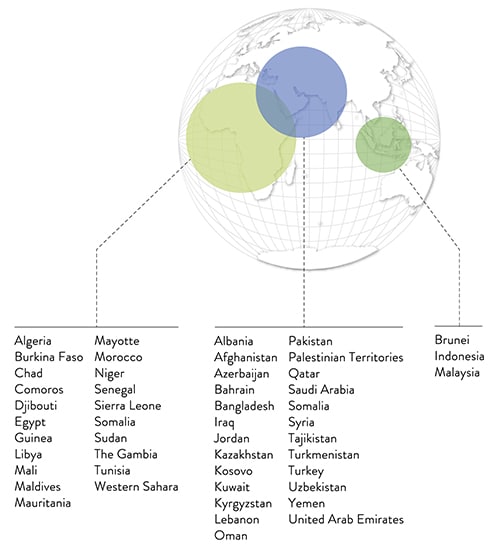 “Protection and preservation of life is important within Islam,” says Muhsin Hendricks (pictured at top), imam and founder of The Inner Circle, based in Cape Town, urging Muslim leaders to embrace the full range of sexual orientation and gender identity among their followers.

“To stop the killing and violence perpetrated against queer people in the name of Islam, what I would like to see the message from the pulpit on a Friday be that religious leaders want to understand things better, want to accommodate, want to include.”

In the United States, Omid Safi, director of the North Carolina–based Duke Islamic Studies Center, has seen a recent upsurge in Muslim and LGBT unity—an unexpected effect of both the June 2016 Orlando massacre and directives from the U.S. administration that target multiple groups, including trans and Muslim people.

“Now, we’re paying attention to who is standing with us,” says Safi, noting new bonds between communities that were previously fighting separately for their rights. “It’s women’s groups, peace and justice groups, organizations like Jewish Voices for Peace, and LGBT groups.”

“Still, wrestling with the Qu’ran’s ancient messages is essential to building a fairer model for today. What we need is safe spaces to have these discussions.”

The Inner Circle has been working since 1996 to build those spaces and networks, including serving as host to the Queer Global Muslim Network, a collaborative of 10 Muslim LGBT organizations spanning from the Middle East and Egypt to Sudan.

One of the regular participants at The Inner Circle’s mosque is 27-year-old high school teacher Mohammed Abdulmugeeth Petersen, whose conservative Muslim family is not as accepting of his sexuality as he would like.

“This mosque is so welcoming,” says Petersen. “I found a community that completely accepts me. I went through a three-month empowerment program there, and that helped me to be more comfortable with being gay and Muslim at the same time.”

“Growing up I struggled hard with my sexuality, and now as a grade 12 teacher, I see some teen-aged students struggling too. So I want them to know that there are people who can listen to them and will understand exactly what they’re going through.”

*Not known to be implemented