The homophobic massacre at the Pulse nightclub in Orlando, Florida, on June 12, 2016, stole the lives of 42 men, mostly gay and Latino, and 7 women, in the prime of their lives, who had briefly experienced an emerging social acceptance across parts of the country.

In the days following the mass killing, hundreds of LGBTQ, Latinx,1 Muslim, and anti-gun-violence organizations signed unity statements calling for “comprehensive action to restore to young LGBTQ people of color the safety and well-being they deserve” and halt all forms of animus, including racism, homophobia, and transphobia.

“While [it is] important to understand the unique circumstances of what happened in Orlando, we must not treat this as an isolated event,” said Beverly Tillery, executive director of the New York City Anti-Violence Project. “This happened while many across the country are celebrating Pride, and against the backdrop of harmful anti-LGBTQ legislation sweeping the nation.”

Just two days after the massacre, the Anti-Violence Project released its 2015 statistics on anti-LGBT hate crimes, including 24 homicides, a 20 percent increase from 2014, the majority of whom were, once again, people of color.

The horrific violence in Orlando and national grieving that followed occurred amid a wave of state and municipal level legislative initiatives in the movements for and against LGBT acceptance and freedoms.

“Since the June 2015 U.S. Supreme Court decision granting the right of marriage to same-sex couples, opponents of LGBT equality have been working at an unprecedented scale to stop any further protections for LGBT people,” said James Esseks of the American Civil Liberties Union (ACLU).

“Only 19 states have laws that expressly bar comprehensive discrimination against LGBT people, and levels of anti-LGBTQ violence, particularly toward trans people, are rising.”2

The introduction of more than 30 anti-transgender “bathroom bills” marked the U.S. 2015–16 legislative session, with the passage of North Carolina’s notorious House Bill 2 in March 2016 unleashing a massive national business, entertainment, and sports boycott of the state.

To comply with the much-publicized North Carolina law, Joaquin Carcaño, a 27-year-old trans employee of the state university’s Chapel Hill campus, must walk from his office to a neighboring building to use a unisex restroom. 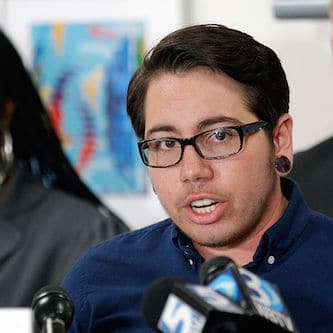 H.B. 2, which requires public agencies to designate “every multiple occupancy bathroom or changing facility” for use only by persons based on their sex at birth (as opposed to current gender identity), went into effect on April 1, 2016, and immediately prompted five lawsuits as well as opposing resolutions in six North Carolina municipalities.

“It’s illegal for me to use the men’s room,” says Carcaño, who is the lead plaintiff in an April lawsuit against the bill’s constitutionality, filed by the ACLU with its North Carolina chapter and Lambda Legal. “As a trans man and therefore a man, using the women’s room would be dangerous to my own physical and mental well-being.”

Williams Institute estimates that North Carolina’s law affects 37,800 trans people and that the state’s violation of federal civil rights protections based on sex and gender identity puts it at risk of losing $4.8 billion in federal funding.

H.B. 2 was just one among more than 100 state-level attempts nationwide during 2016 to legalize anti-trans, gay, and lesbian discrimination—surpassing the prior year’s record.

More than 60 of these proposed laws related directly to same-sex marriage, such as exempting government workers or clergy from performing them; about half were introduced in the 14 states often considered the U.S. South3.

In the 30 states without laws forbidding employment or housing discrimination based on both sexual orientation and gender identity, more than 200 local municipalities have stepped in to enact local nondiscrimination ordinances, with more than 20 passed in 2015.

Fewer than five of these ordinances have been repealed as Houston’s was, according to the Movement Advancement Project.

Still, in the wake of discriminatory laws like the one passed in North Carolina, the Transgender Law Center carried out an analysis that pointed to “a growing movement by Southern cities to reject radical anti-LGBT attacks and support transgender members of their communities.”

That shift was evident on February 23, 2015, when Georgia became the first southern state to “ban the box,” releasing job applicants from the requirement to disclose felony convictions on state employment applications.

For trans applicants who had worked in the commercial sex industry, this requirement had all but eliminated the opportunity to compete for government jobs.

During the subsequent year, growing pressure over the incarceration risks faced by trans immigrants without U.S. residency status led 35 Democratic Congress members in March 2016 to call for an end to detention of this vulnerable group, the majority of whom are trans women.

Despite making up a tiny proportion of the detained population, trans detainees comprise one in five substantiated cases of sexual violence in Immigration and Customs Enforcement facilities, according to the U.S. Government Accountability Office.

“These are some of the most vulnerable people in the world, and attempts to help them have been woefully inadequate,” says Aaron C. Morris, executive director of Immigration Equality. “The most humane, cost-effective, and immediate solution is to find alternatives to detention, such as supervised release programs.”

He notes that churches, for example, have offered to house trans immigrants and ensure that they attend their court dates.

Bathroom Challenge Due In Court

As this report went to press, Joaquin Carcaño was awaiting a ruling on the ACLU’s motion to suspend North Carolina’s H.B. 2, scheduled for a court hearing in August 2016.

Despite the challenges he is up against in North Carolina, he says that welcome change has arrived in his Texas hometown of Edinburg, a small city that lacked a high school LGBT group or community center when he was growing up.

Carcaño stopped going to church at 14 when adults leading his youth group called homosexuality “sinful.” But Edinburg, close to the border with Mexico, now has an LGBTQ people of color group called Aqui Estamos, or Here We Are.

1“Latinx” is a gender-neutral alternative to Latino, Latina, and Latin@.