When workers at the Chimpanzee Conservation Center,1 a sanctuary in the West African country of Guinea, saw their former resident Annie thriving with a newborn baby back in her natural forest home in 2016, they raised a cheer.

Center staff, including founder Estelle Raballand and Executive Director Chris Colin, had first come to know Annie as a three- or four-year-old chocolate-brown orphan, who was delivered to the center traumatized and fearful after her rescue in 2007 from a wildlife trafficker. 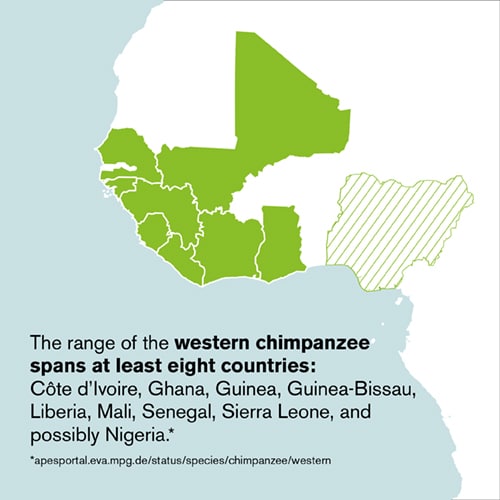 “We were delighted to see Annie doing so well, and with her second child,” said Colin, noting that all of the 14 western chimpanzees released during 2008 and 2011 have thrived in the carefully investigated and demarcated forestland in Haut Niger National Park.

“It takes years to prepare our sanctuary residents to fend for themselves in the wild. They have to relearn their natural levels of independence while being able to adapt to life as part of a family group,” Colin says.

The center’s 60 chimpanzees are among a total population of 8,000 to 20,000 that Colin estimates remain in Guinea after a decline of at least 80 percent across their West African range over three generations, due mainly to displacement by local iron and bauxite mining operations.

The entire subspecies, Pan troglodytes verus, is now classified as critically endangered by the International Union for Conservation of Nature. 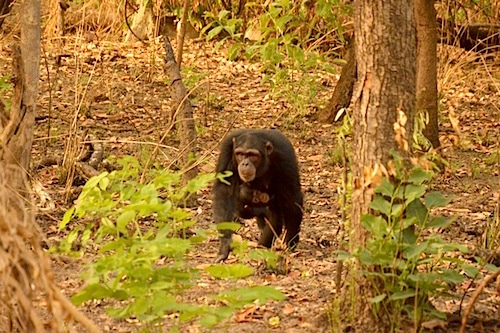 Annie carries her second baby, Aniouma, in 2016. She was released in 2011, to join a group of chimps released in 2008. The entire subspecies, Pan troglodytes verus, is now classified as critically endangered by the International Union for Conservation of Nature.

A Melting Pot of Cultures

Before releasing the chimps, the center secured a location with natural borders, including rivers and roads, to avoid chimpanzees stumbling into villages, hunting areas, or territory already claimed by other chimpanzee groups.

“Like people, chimps have specific cultures. In one part of Guinea, they might just eat the leaves of a tree; in another they might eat the bark or flowers. We have a melting pot of cultures and they learn from each other,” Colin says.

The center is among 22 Pan African Sanctuary Alliance (PASA) member organizations, the majority of which provide safe haven to at least one of the four species of African chimpanzees, whose population has dwindled to an estimated 170,000 to 300,000 individuals.2

PASA members, as well as sanctuaries in other parts of the world, particularly in Indonesia—home to the critically endangered Sumatran and Bornean orangutan—often struggle for resources to accommodate new residents.

“As enforcement of wildlife trafficking laws improves, sanctuaries expect to receive more confiscated animals, and many of the great apes sanctuaries accredited or verified by the Global Federation of Animal Sanctuaries (GFAS) are pushed to their limits,” says Kellie Heckman, the federation’s executive director.

“Many rescue centers throughout Southeast Asia, for example, do their best to provide quality care to the numerous orangutans and gibbons that flood their facilities beyond capacity. They need more resources.”

More than 30 organizations took part in Giving Day for Apes in 2016, which raised $391,868 and provided much-needed assistance to many of these groups to help them enhance communications and fundraising efforts. 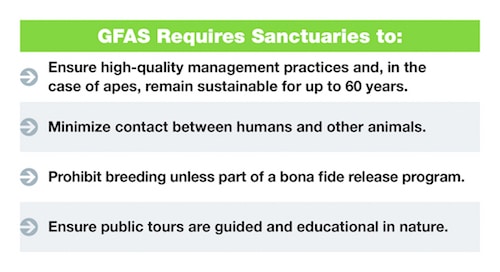 Suitable locations for reintroduction are also increasingly limited, according to the forthcoming edition of State of the Apes: Infrastructure and Ape Conservation, and the number of apes in need far exceeds facility capacity.

“There are fewer and fewer places to release them safely, due to a number of factors including deforestation and poaching,” says Jackie Bennett, GFAS director of accreditation for Africa and Asia.

For sanctuaries, rescue centers, and rehabilitation centers, including those outside of range states in the Americas and Europe, GFAS provides guidance to ensure that sanctuaries can provide as many as 60 years of uninterrupted physical care and mental enrichment that are vital to apes’ health and well-being.

Among those accredited sanctuaries, Chimp Haven, in Keithville, Louisiana, in December 2016 received 10 apes that had languished at the Alamogordo Primate Facility following their use in U.S. government-led biomedical research.

They were the latest in the ongoing transfer of federally owned chimpanzees, officially retired following the 2015 National Institutes of Health decision to halt experiments on them.

Twenty-five Alamogordo chimps—many of them old and in poor health—are expected to join them at Chimp Haven in 2017 with funding from the Chimpanzee Sanctuary Fund, leaving approximately 550 federally and privately owned chimpanzees still housed in repurposed research facilities.

Several other captive chimpanzees are the subjects of ongoing litigation led by the Nonhuman Rights Project to secure their right to release to sanctuary from lives of confinement as pets or roadside attractions.

Laura Bonar, director of Animal Protection New Mexico, which is helping to move chimpanzees out of the Alamogordo research lab, welcomes the transfer of additional animals to sanctuary:

“For generations in the United States, humans acted in ways that caused terrible suffering for chimps, and many of those in labs have never known what it means to live as part of a chimp family—let alone the feeling of growing up in the wild.

“Providing sanctuary is a tremendous undertaking, but it’s possible when people work together. Chimpanzees are mortal, just like us, and especially for older, sicker chimps who suffered for years in invasive research, time is running out to do the right thing.”

1An initiative of Project Primate.