Pledges by Big Industry Give Indonesian Forests, Endangered Orangutans, a Chance to Thrive

McDonald’s, the world’s largest fast-food chain, in April 2015 became the latest corporation to announce that it would source paper and palm-oil products only from companies committed to stopping forest clearance, one goal of a long-fought campaign to protect rich and fragile terrain that provides habitat for endangered species, including great apes.

The company’s pledge became the latest in a cascade of corporate no-deforestation announcements that unfolded throughout 2014 among mainly international food and cosmetic manufacturers, including Colgate-Palmolive, Johnson & Johnson, and Mars.

Many of these companies have long sourced raw materials, such as the low-cost fruit of the oil palm tree, from local providers operating on land that is home to endangered birds, fish, amphibians, reptiles, and mammals, such as orangutans in Indonesia.

“We have to take away the financial incentives to destroy forests as quickly as possible so that orangutans are not left with mere islands of habitat, subject to constant assaults from the outside,” says Rolf Skar, Greenpeace Campaigns Coordinator. 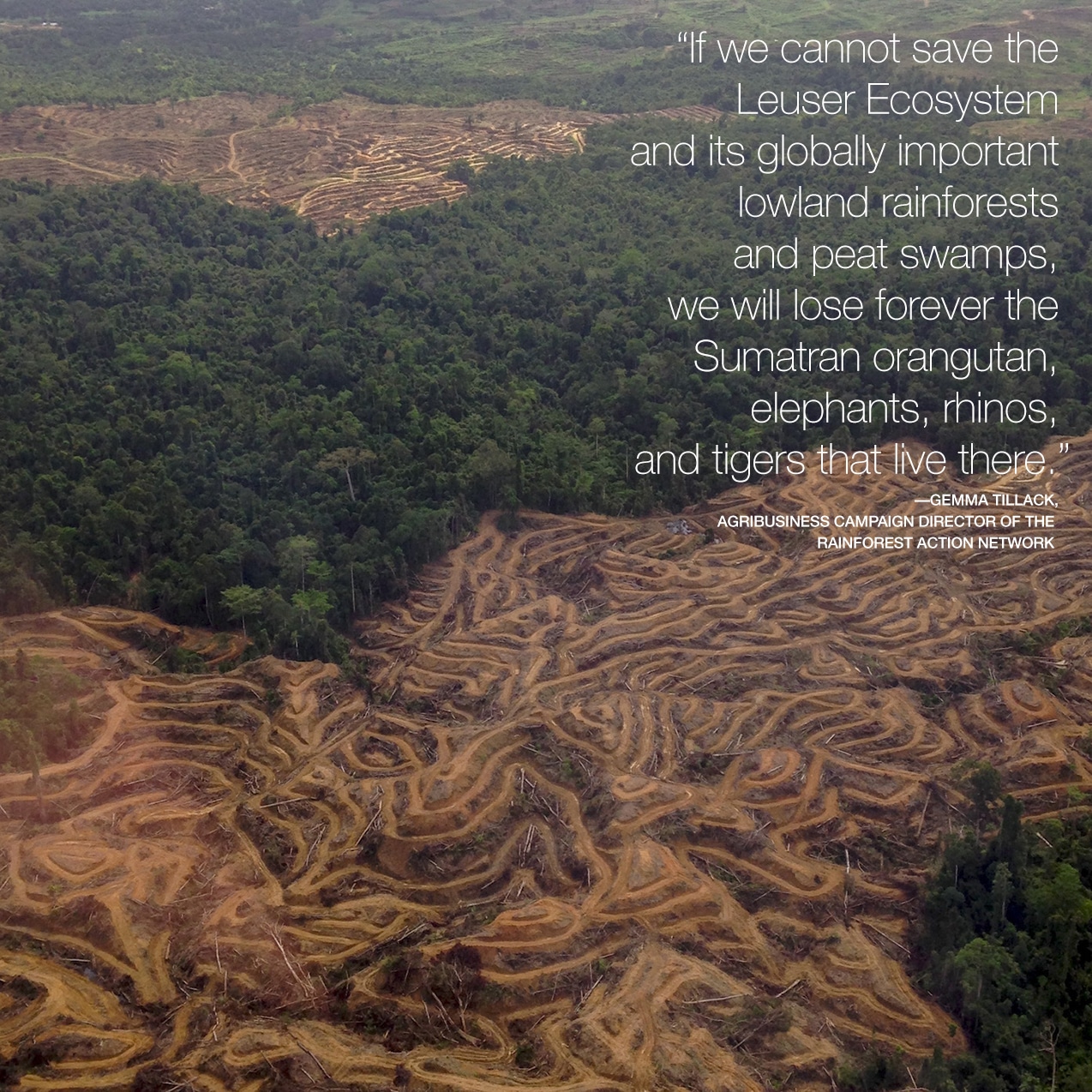 Some 7,000 remaining Sumatran orangutans and many of their 50,000 Bornean relatives have been confined increasingly to a fragmented and degraded arboreal landscape as a result of widespread cultivation of oil palm, which requires low-lying, wet, tropical conditions.

Almost half of all palm oil consumed globally is grown in Indonesia, and its cultivation has transformed landscapes across the archipelago, where more than 270,000 square miles of forest were lost between 2001 and 2013, according to Global Forest Watch.

Losses of forest in both Indonesian and Malaysian Borneo will be exacerbated by climate change, according to a July 2015 report1 by the United Nations Environment Programme and Liverpool John Moores University in collaboration with the Great Apes Survival Partnership.

“The combined impact of land-cover and climate change might therefore be more pronounced than either factor alone,” the report states, with scientific models predicting a 68 to 81 percent forest loss from 2015 to 2080, without further action.

Among the factors triggering the latest series of corporate announcements was the decision in April 2014 by Procter & Gamble—one of the world’s largest palm-oil purchasers—that it would join other large companies in using palm oil produced only without forest destruction.

The month before P&G’s announcement, hundreds of thousands of Greenpeace supporters had called the company, demanding that it protect “high-conservation-value” forests—defined by the Forest Stewardship Council as land that, among other criteria, hosts important biodiversity or endangered species, or is of economic or cultural importance to local populations.

“Now that the majority of the big palm-oil players have said that they will not be involved in deforestation, we have to make sure they follow through,” Skar says, noting that along with its partners it will monitor satellite maps, conduct spot checks on industrial activity, and pay close attention to corporate reports.

Corporate pledges to end deforestation started in 2011 when Golden Agri-Resources announced a Forest Conservation Policy, a move that was repeated in 2013 by Asia Pulp & Paper (APP)—formerly Indonesia’s largest deforester—after an international Greenpeace campaign.

The commitment by APP ended a long history of deforestation throughout Indonesia within a framework that also commits the company to resolving social conflicts and better managing carbon-rich peatlands.

An independent evaluation by the Rainforest Alliance released in February 2015 showed that APP was sticking to its no-deforestation pledge but had much more work to do to resolve long-standing social conflicts often complicated by corruption and confusion in land-use planning.

Yet in May 2015, The Forest Trust, which devised Golden Agri-Resources’ zero-deforestation and community engagement plans, broke with the company, citing slow progress and breaches in the Forest Conservation Policy which the company had signed.

With closer scrutiny of Indonesian oil palm practices has come the industry’s move into West Africa, and in spring 2015, the Forest Peoples Programme revealed that a local palm oil company whose lead investor is Golden Agri-Resources was also violating the Forest Conservation Policy in Liberia.

“In Indonesia, there’s a commitment and a willingness from producers and traders to protect forests, but we need the government to change the laws so forests can be protected into the future,” says Gemma Tillack, agribusiness campaign director of the Rainforest Action Network.

A January 2014 Indonesian high court ruling shut down and levied a $30 million fine against PT Kallista Alam, a local palm-oil company that in 2012 illegally burned large parts of one of the few remaining carbon-rich Tripa peat forests in Sumatra’s Leuser Ecosystem, killing at least 100 orangutans.

“This area is the last stronghold of the Sumatran orangutan because the trees in peat swamps provide such abundant fruit,” says Tillack. “The fires in 2012 and ongoing palm-oil expansion are driving Tripa’s already decimated orangutan population closer to extinction.”

“If we cannot save the Leuser Ecosystem and its globally important lowland rainforests and peat swamps, we will lose forever the Sumatran orangutan, elephants, rhinos, and tigers that live there.”

1The Future of the Bornean Orangutan: Impacts of Climate Change in Land Cover and Climate

ChimpCARE Helps Some of Our Closest Relatives Find a Better Future