Some scientists thought mountain gorillas would be extinct by now.

Instead, at the end of last year, their official conservation status got a promotion—from critically endangered to endangered—for the first time, thanks to population survey results released earlier in 2018. Now, the mountain gorilla—Gorilla beringei beringei, a member of the largest living primate species, the eastern gorilla—is the only great ape whose numbers are known to be increasing.

But the numbers—the highest ever recorded—are still startlingly low: just over 1,000.

“It’s good news something has been done right,” says Dr. Martha Robbins, a research scientist at the Max Planck Institute for Evolutionary Anthropology, who co-authored the Red List of Threatened Species assessment published by the International Union for Conservation of Nature, the global authority that monitors species’ chances of survival.

“On the other hand, we need to talk about it as a cautionary tale,” Robbins says. “Simply because the population is moving up, we can’t turn our backs on them.”

Mountain gorillas, who live in two distinct subpopulations in Central-East Africa’s mountainside forests and have a slow reproductive rate, can easily be pushed back to the brink of extinction by any range of disturbances, like an infectious disease outbreak, a surge in snares set for other wildlife, deforestation, fire, or war.

“It’s not a time to fall asleep at the wheel,” says Laura Parker, a spokesperson for Democratic Republic of the Congo’s Virunga National Park, one of five protected areas and four national parks in three countries—DRC, Uganda, and Rwanda—home to mountain gorillas. “It’s the boots on the ground keeping these animals safe.” 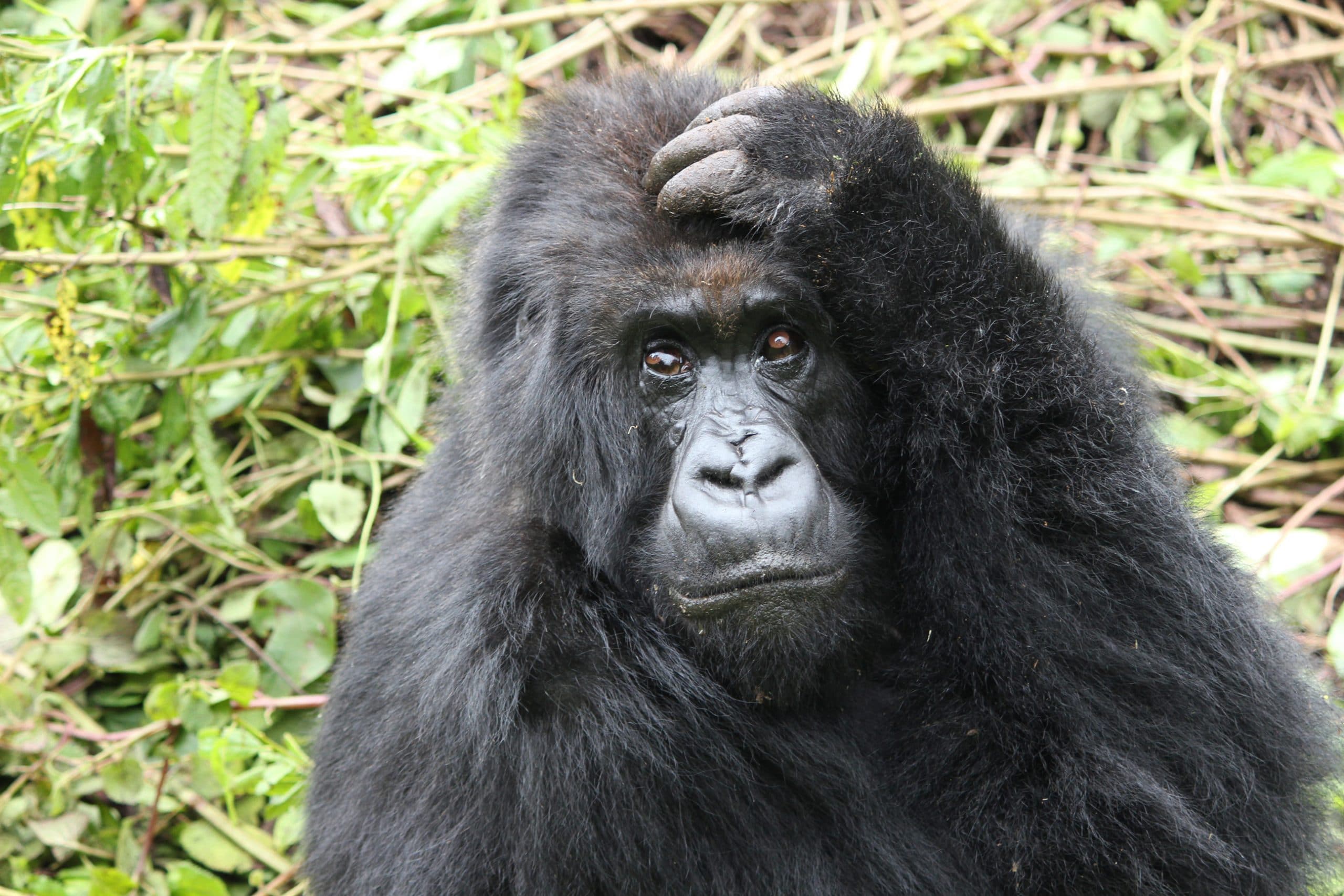 The current stability of mountain gorillas can be attributed to decades of conservation efforts—both conventional (minimizing negative human influences) and “extreme” (increasing positive human influences)—launched in the late 1970s. These include regular censuses, close monitoring of individual gorillas, anti-poaching patrols, veterinary interventions, habituation of groups for tourism, community education, and inter-governmental collaboration—all despite periods of intensive armed and, in 1994, genocidal conflict in the region.

Rangers patrol the parks, searching for signs of poaching and other illegal activities that can degrade the habitats of gorillas and other wildlife; tracking gorillas; and removing snares, calling in Gorilla Doctors to administer life-saving medical care when they find a gorilla caught in one or exhibiting signs of illness. Veterinary care is credited with half of the 4 percent annual growth rate in habituated mountain gorillas.

Defending Virunga, its wildlife, and its visitors is a particularly dangerous job in one of the world’s deadliest regions: Over the past 20 years, the park’s team has lost more than 175 rangers at the hands of anti-government rebels, local militia groups, and perpetrators of wildlife and forest crime. In 2018, Virunga posted a death announcement once a month.

Less of a risk to mountain gorillas’ protectors has been tourism, which since the ‘80s has contributed to the subspecies’ population increases, fostered cultural shifts, and generated revenue—parks charge between $400 and $1,500 for an hour of viewing—for conservation programs, park operations, and local economies.

“Schools have been built, trenches dug, and buffalo walls constructed along the park boundary to address animal problems on farms,” says Mukanoheli Solina, a former poacher in Nyakigina, near Rwanda’s Volcanoes National Park. “Consequently, we have been able to farm in peace and harvest more from the farms. There’s a change in attitude and perception toward mountain gorilla conservation.”

But for all the benefits tourism brings, being around humans—nearly 50,000 a year—can be stressful for gorillas and expose them to disease. Exposure to a case of Ebola or the measles could quickly wipe out a population.

With DRC’s latest Ebola outbreak—the second largest of the disease in history—right on the doorstep of Virunga, staff at the park are going beyond already-stringent guidelines for great ape tourism, research, and monitoring by adding washing stations, training rangers in hygiene, limiting circulation of staff in affected areas, and questioning tourists.

The Gorilla in the Room

Despite the mountain gorilla’s status upgrade, the two overarching gorilla species and the three other subspecies remain critically endangered.

Mountain gorillas belong to the eastern gorilla species. The other eastern gorilla—the Grauer’s gorilla or eastern lowland gorilla—is down to fewer than 3,800 individuals after losing 77 percent of its population since 1994.

The western gorilla species includes the most endangered of the African apes, the Cross River gorilla, whose numbers are estimated to be between 250 and 300.

The western gorilla also has the most numerous and widespread subspecies, the western lowland gorilla, which a 2018 survey revealed is actually bigger than previously thought—about 361,900 individuals, as opposed to between 150,000 and 250,000. Still, their decline—estimated to be about 3 percent annually—is so precipitous that it’s expected to exceed 80 percent over three generations.

As for other great apes, all orangutan species are critically endangered. All chimpanzee species are endangered, as is the bonobo species.

International Gorilla Conservation Programme (IGCP) and Gorilla Doctors are also pushing for greater adherence to tourism best practices, which include humans getting no closer than 7 meters away from a gorilla (10 if not wearing a face mask), and a single gorilla group encountering no more than one group of eight humans for an hour a day. Gorilla Doctors is leading an effort to install handwashing stations and improve hygiene practices at Volcanoes, too.

“Tourism was one of the most instrumental factors in why we still have mountain gorillas today,” Max Planck’s Robbins says. “But we need to be vigilant in enforcing the rules so tourism remains a means to support conservation—not a conservation threat.”

“Gorillas are big,” she continues, “but we’ve put a lot of weight on their shoulders.”

What do defenders of mountain gorillas consider success, beyond preventing untimely losses? At least 10 institutions are currently preparing to establish targets for stable populations and a plan for how to sustain them, and determine more effective ways to monitor conservation indicators over time, says IGCP Director Anna Behm Masozera.

In the meantime, groups like IGCP are returning to their community engagement roots—having enjoyed success with higher-level collaboration when the three countries’ governments signed a treaty on transboundary protected areas in 2015—by seeking participation and input from park managers and neighbors in conservation techniques like tourism, law enforcement, and revenue sharing.

“We need to keep giving people opportunities for networking and information-sharing so they don’t lose trust in what we’re doing,” Masozera says. “What motivates people is having a voice—it’s not always about the amount of revenue, but how the engagement process works.”

“Mountain gorilla conservation is at a crossroads,” she says. “We have to sustain and enhance what we know to be working.”

What’s in a Name? Why “Endangered” Label Doesn’t Put Mountain Gorillas in the Clear