As Chimpanzee Habitat in Guinea Is Threatened, Environmentalists Join Forces to Save Lives

Little was known about Simon, an emaciated and malnourished baby chimpanzee, when he was confiscated from an unknown man by police last June in Conakry, the capital of Guinea, West Africa.

Ragged and with a dull tone to his fur, the 10-month-old was handed over to a local wildlife protection agency, which took him to the Chimpanzee Conservation Center, a sanctuary inside one of the region’s most important protected areas, the 1,200-square-kilometer Haut Niger National Park.

Staff at the center speculate that—as is often the case with orphaned chimps arriving at the sanctuary traumatized—Simon and his family were displaced by mining activities in Guinea’s northwest. His mother and other family members were likely killed for bushmeat, and he fell prey to poachers who intended to traffick him as a pet.

“When Simon arrived, he was sad, like a lost baby,” says the center’s executive director Christelle Colin, noting that a year since his arrival, and after a period in quarantine, his vitality is restored: “He’s happier and healthier—we often hear him laughing instead of sleeping.”

At the sanctuary, Simon, now two years old, lives among about 60 other western chimpanzees in an environment as close to their natural forest habitat as possible. He shares his days with three other chimps, Tita, Nana, and Oumo.

Many other of the sanctuary’s residents have also been rescued after being poached, trafficked, or otherwise pushed out of their forest homes by infrastructure development or resource extraction, such as mining of bauxite, a key material in the production of aluminum.

Guinea is Africa’s top bauxite producer and the biggest exporter of the ore to China, the world’s largest producer of aluminum. Guinea’s bauxite reserves are concentrated in the northwest, where its extraction overlaps with the range of the critically endangered western chimpanzee.

More than two-thirds of West Africa’s 53,000 western chimpanzees (Pan troglogytes verus) live in Guinea, according to new research published in May 2019. But only 17 percent of that total live in state-managed protected areas, such as national parks.

“Some 60 percent of all [western] chimpanzees live less than 10 kilometers from human infrastructure development, and for them there’s a lot of pressure,” says Estelle Raballand, the sanctuary’s founder and the president of Project Primate, a U.S.-based nonprofit supporting the Center in Guinea, another site in Côte d’Ivoire and other great apes in captivity around the world.

One such infrastructure project expected to have a large-scale impact on local communities—and the chimpanzee population—is the proposed Koukoutamba hydroelectric dam in the Fouta Djallon highland region of central Guinea.

Environmentalists have raised an alarm over the project, to be developed by Chinese-owned hydropower company Sinohydro, for which a commercial contract was signed in February 2019 with backing from the Bank of China.

The project would destroy a portion of the habitat of around 1,500 chimpanzees who live in the region’s Moyen-Bafing National Park, along with the homes of thousands of human inhabitants, and vast tracts of forest home to many other species.

The hydroelectricity generated by the dam would likely contribute to development of the region’s bauxite industry, as well as exported and sold to neighboring countries; local communities are not expected to benefit.

Motoko Aizawa, president of The Observatory for Sustainable Infrastructure, speaking at a recent Arcus Foundation panel on managing the promise and risk of infrastructure development, pointed to the large number of “mega projects” around the world:

“There are so many of them,” she says, “and of course there’s the Belt and Road Initiative, which is the mother of all such infrastructure plans. If these plans are implemented, they can literally change the face of the earth.”

Hydropower accounts for nearly one-fifth of global electricity generation and is the primary source of electricity in some countries, including Democratic Republic of the Congo, Lao PDR, and Uganda, according to State of the Apes: Infrastructure Development and Ape Conservation. 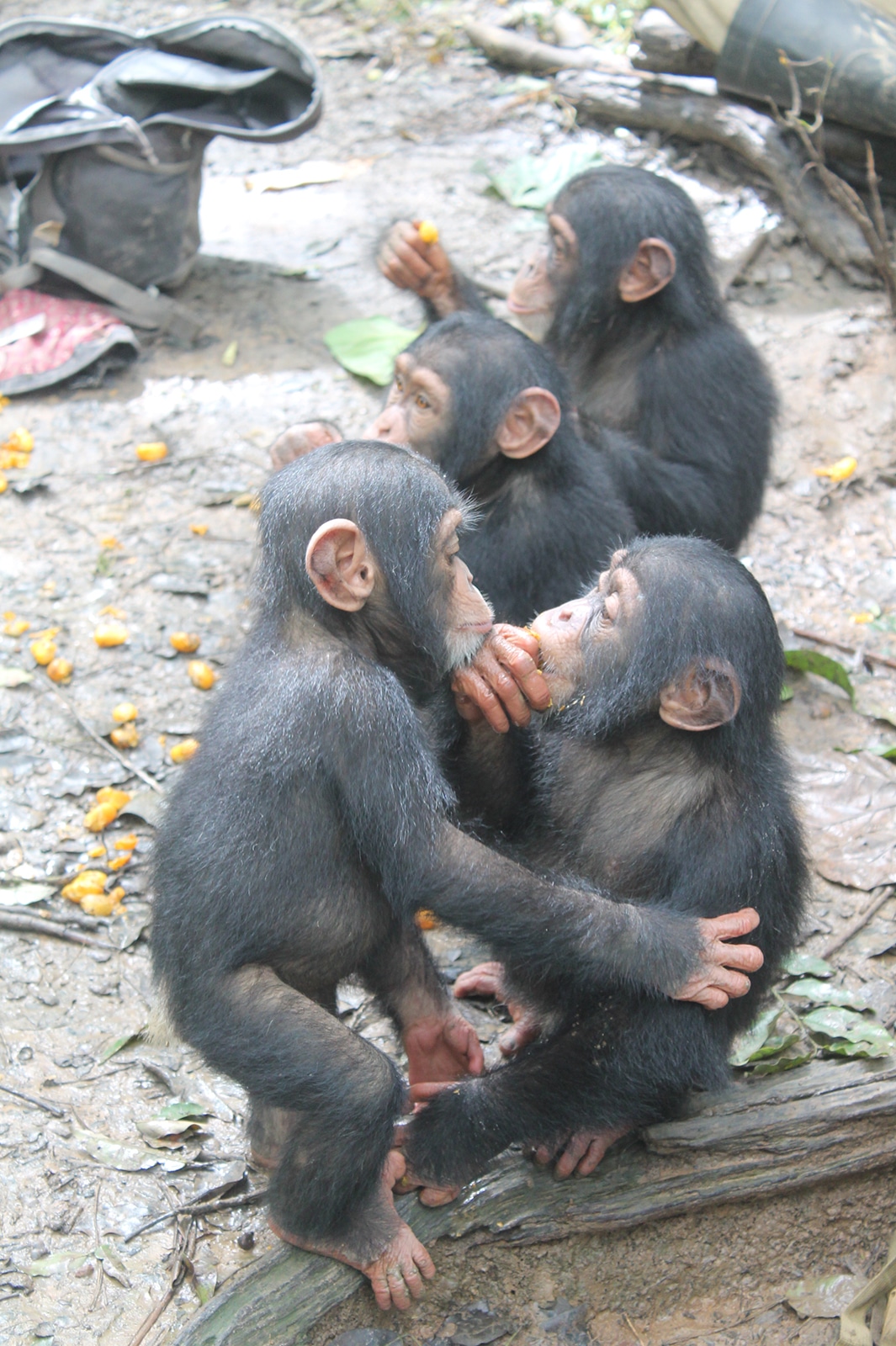 In an attempt to address the potential impacts of the Koukoutamba project on the surrounding population in Guinea, one of the poorest countries on the African continent, conservationists are conducting high-level conversations with the Chinese government, as well as national and regional bodies in Guinea, and the World Bank, which funded the dam’s feasibility study.

“The building of the dam is probably going to jeopardize the lives of up to 1,500 chimpanzees,” says Dirck Byler, great ape conservation director at Global Wildlife Conservation, a United States-based nonprofit coordinating efforts to influence the decisionmakers.

“The original environmental impact assessment did not take into account best practice guidelines,” Byler says, noting that the dam will displace human populations as well as chimpanzees.

Byler notes that the 2018 creation of the Moyen-Bafing National Park was a tremendous success for conservation of western chimpanzees in Guinea. But the proposed dam will compromise this victory.

“We’re trying to get these countries to think about the long-term and biodiversity values that they have, in addition to generating power and revenue,” says the organization’s chief conservation officer Russ Mittermeier.

“We’re going to be running into these challenges and threats for the next 100 years, so we want to ensure that proper safeguards are in place from the outset—and cases like the Koukoutamba dam are critical.”

How Clyde the Chimpanzee Received a New Chance at Life