Killing, Capture, and Trade in Apes: A Cycle That Ends with Us

A rescued chimpanzee clings to a national park guard in Democratic Republic of the Congo as a group of children look on. Site-based law enforcement is key to the prevention of illegal wildlife hunting, and local communities are critical partners.

A rescued chimpanzee clings to a national park guard in Democratic Republic of the Congo as a group of children look on. Site-based law enforcement is key to the prevention of illegal wildlife hunting, and local communities are critical partners. 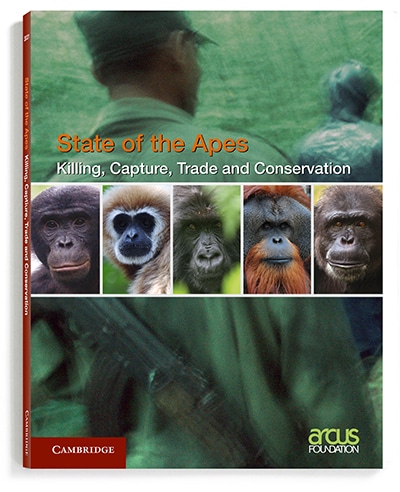 All great apes and gibbons are at risk of extinction. Their primary threats are habitat loss, killing or capture, and disease—whose devastating effects are all compounded by the complex ways they interact.

In the first three volumes of Arcus’ State of the Apes book series, we explored the ways extractive industries, industrial agriculture, and infrastructure development drive the dramatic destruction of ape habitats. The newest volume of State of the Apes—published this month by Cambridge University Press—examines another significant player in the disappearance of bonobos, chimpanzees, gibbons, gorillas, and orangutans: their killing, capture, and trade.

Given the rapid decline of nearly all nonhuman ape species, it may come as a surprise that they are legally protected everywhere where they live. But although it is illegal to kill and trade in apes, with very few exceptions, it is not illegal do many of the things that enable their killing or sale. And despite some localized population increases in recent years, in most places, populations are decreasing—which is all the evidence we need that legal protections are not sufficient in effectively halting the threats. 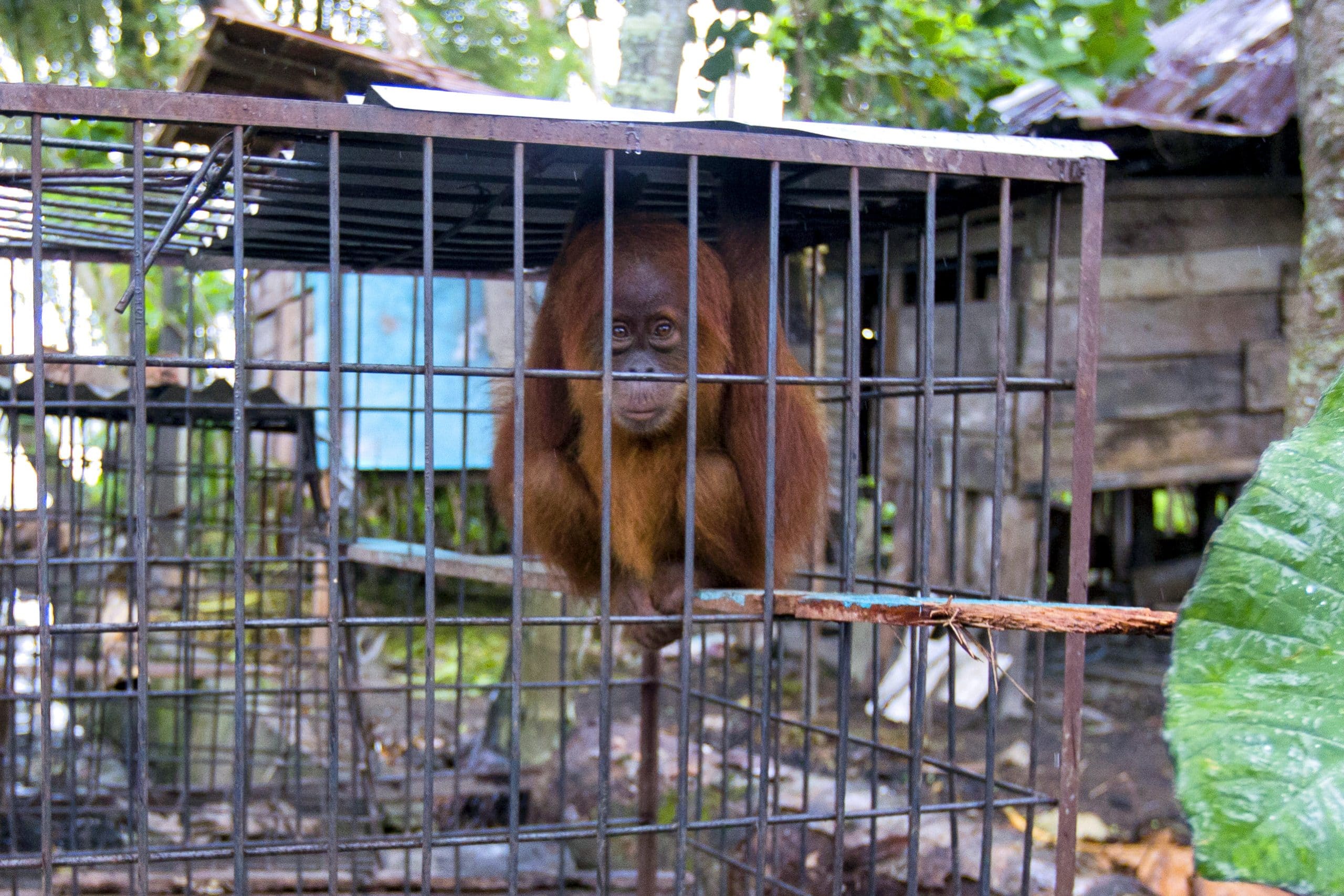 A young orangutan sits on a piece of plywood in a small metal cage at a
“zoo” in northern Sumatra, Indonesia, where animals are sold into the illegal
wildlife trade.

A young orangutan sits on a piece of plywood in a small metal cage at a
“zoo” in northern Sumatra, Indonesia, where animals are sold into the illegal
wildlife trade.

This killing and capture is not new. It is perpetuated for a number of reasons:

Though these practices have long threatened ape survival, what is new is humans’ rapid and dramatic expansion into areas where nonhuman apes live. 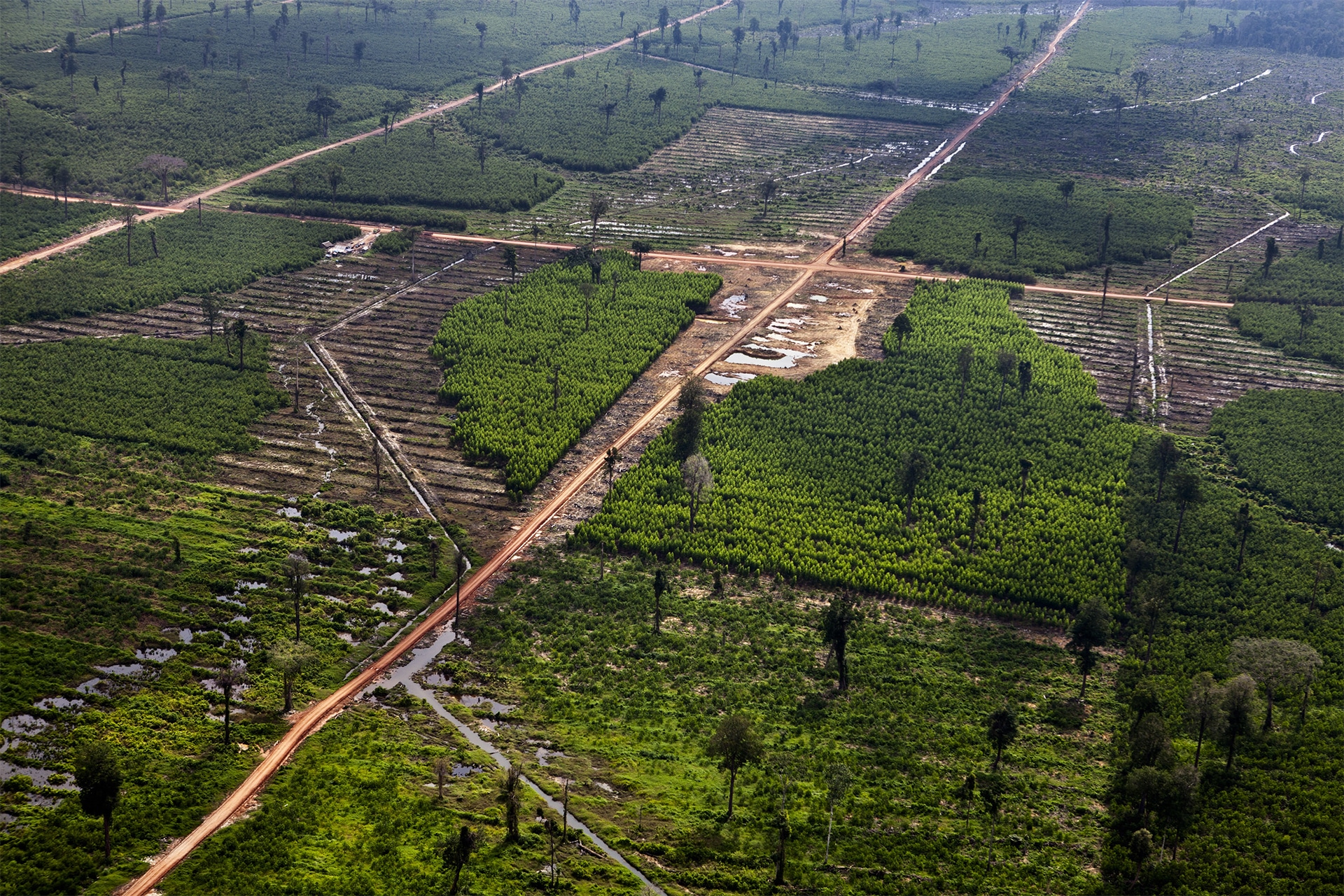 Over the past 50 years, industrial agriculture has transformed these landscapes, from Indonesia to Democratic Republic of the Congo. Whether for palm oil, rubber, cocoa, or paper and pulp, huge swaths of pristine forest have been converted into plantations—removing apes’ sources of sustenance and inviting humans into their living space.

Industrial-scale extraction—like logging, mining, and hydroelectric power—also brings humans into formerly remote areas. The more people there are, the more land is converted for farming and the more we see hunting, pollution, and other activities that hurt wildlife populations.

What makes these human incursions possible is a third set of changes to the land: the introduction of roads, bridges, hydroelectric dams, railroads, electricity pylons, and other forms of infrastructure. Places that were once so remote that no humans ventured there are suddenly not remote anymore. Carving roads into the forest has not only brought small-scale subsistence farmers and small-time hunters into ape habitat, but sparked the involvement of sophisticated criminal intermediary networks in what has become a multimillion-dollar trade in endangered species.

In other words, the enormous degradation and destruction of tropical forests around the world has set the stage for the killing and capture of apes on a scale that was previously unknown. Human movement into ape habitat is outpacing the protections that have been put in place, including laws, rescue programs, public education, and sustainable development programs.

In most places, apes are not the only or even the primary victims: monkeys, ungulates, pangolins, forest pigs, elephants, and countless other species are also in the line of fire. However, for a hunter, killing a large animal is a much more efficient use of time and energy than killing a small one. For large animals like apes who breed slowly, the killing or capture of even a few individuals has a severe impact. 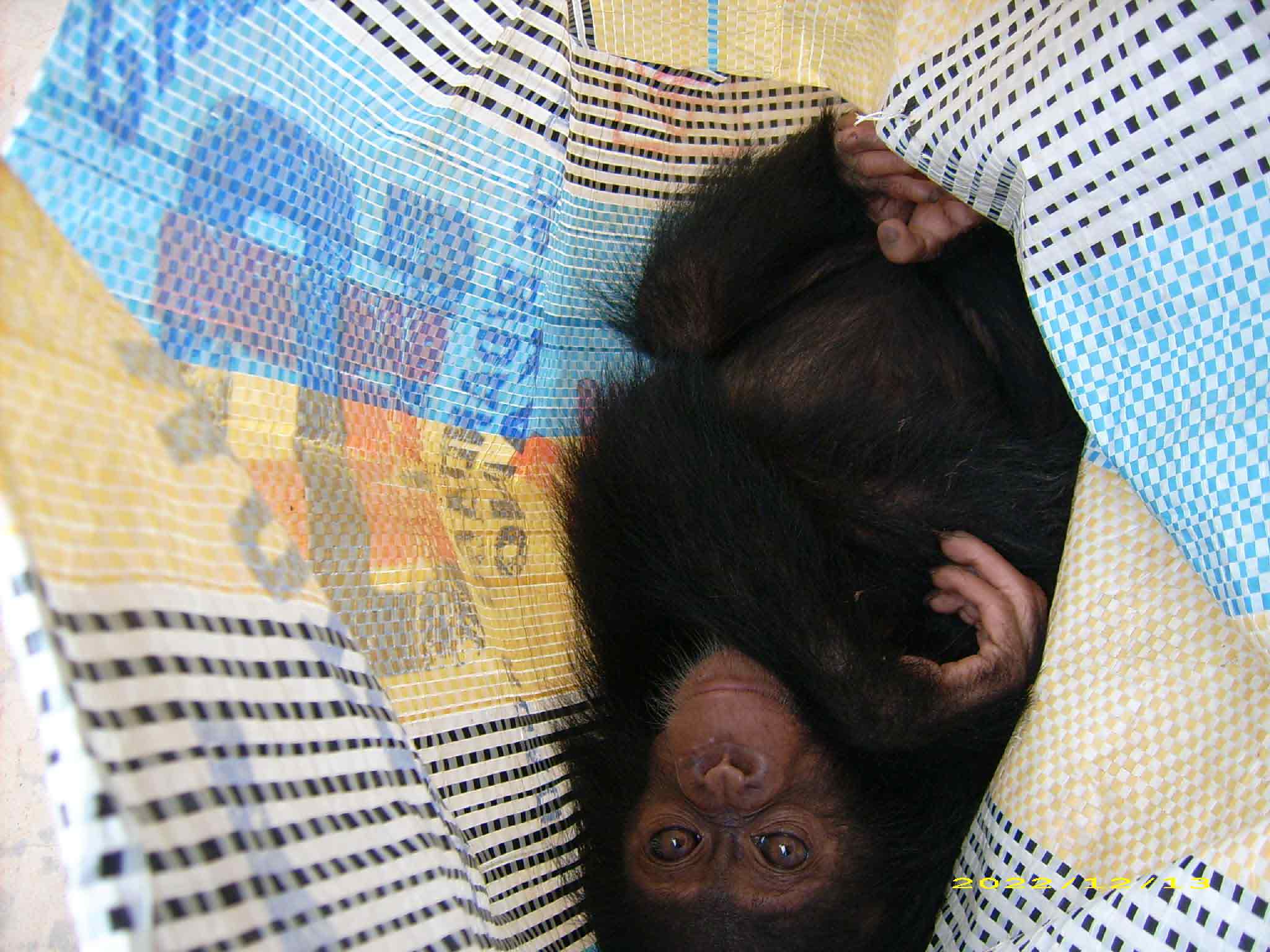 This baby chimpanzee was confiscated and rescued during the arrest of a
wildlife trafficker in Cameroon.

This baby chimpanzee was confiscated and rescued during the arrest of a
wildlife trafficker in Cameroon.

Hunting apes not only brings us closer to their extinction, but sets off a chain reaction of suffering that can last decades for the individuals and families who survive. Because baby chimpanzees are not weaned until the age of 4 and depend on their mothers for the first 10 years of life, killing a mother to take a baby causes profound harm. Breaking up social groups by killing individuals destroys their social fabric and interrupts the intergenerational memory needed to teach the young to survive. Once babies are put in sanctuaries, they can rarely return to the wild; sanctuaries that take in babies must have the resources to take care of them for the rest of their lives—up to 50 years.

The ultimate culprit in these crimes is not the local people, who often also suffer enormously from the destruction of the land on which they depend for food, water, and other resources. It is us: consumers in rich countries who—perhaps unknowingly—use resources that come from low-income states to keep our economies growing ever larger.

The raw materials for practically everything we in developed countries consume—iron, gold, cassiterite used in tin, coltan used in mobile phones, uranium, diamonds, paper, palm oil, coffee, soy—all come from somewhere else, at great immediate expense to distant habitats, populations, human and nonhuman individuals, and, ultimately, to the consumers themselves.

If we are the drivers of habitat loss and destruction, it is we who must turn the tide. But how?

Coming in 2022: How Disease Threatens Apes

The fifth volume of State of the Apes will examine how disease transmission between human and nonhuman apes factors into the long-term survival of endangered species.

Learn more about the publication series and explore the first four volumes at stateoftheapes.com.

First, there must be a newfound awareness among everyday people about the acceptability of apes in entertainment or as pets. Several Arcus partners are working to bring about behavior and attitude change so that it is no long appealing to see suffering animals in these settings.

Second, laws against the criminal hunting and killing of apes must be both enforceable and enforced at every step of the supply chain. Criminals need to be prosecuted, and the enormous financial networks to launder money and illegally trade apes need to be brought to justice. The judiciary and law enforcement authorities need to understand the law and apply it.

Third, we must make the link between human activities that exploit nature and the impact they have on natural ecosystems, health, social justice, human well-being, climate, and pollution, as well as wildlife and their well-being. Humans are part of nature and must live in balance with nature, rather than exploiting it for our short-term gain.

The change must come from us. 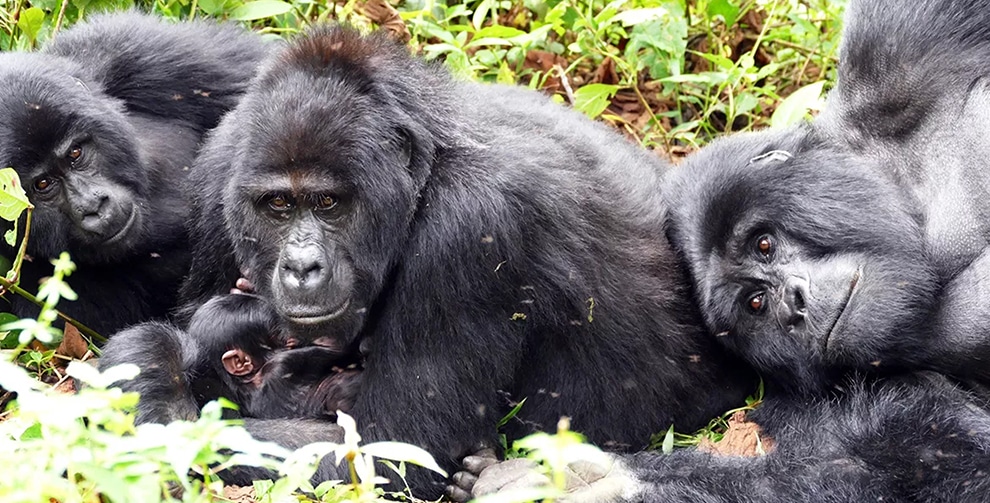