At least 440 orangutans illegally kept or traded as pets were confiscated from Indonesian traffickers between 1993 and 2016—but only seven offenders were brought to justice, despite protections afforded to the critically endangered great apes in the Southeast Asian country.

Throughout their 31-country range in Africa and Asia, thousands of apes are being lost to illicit trade every year, but inadequate domestic laws and law enforcement are failing to stop this multi-million-dollar industry, which adds to the species’ ongoing population declines.

A webinar with the authors of Legal Protections of Great Apes and Gibbons
digs into the research and the new online intelligence platform.

In the first-ever global research on legal protections for great apes and gibbons in their range states, legal intelligence organization Legal Atlas examined 300 laws and 40 treaties in 17 countries where the seven great ape species and 15 of the gibbon species live. Its new interactive platform allows for country-by-country comparisons.

“Markets for illegal wildlife start and finish at the national level,” the authors wrote, emphasizing that a government’s implementation of the Convention on International Trade in Endangered Species of Wild Fauna and Flora (CITES) is the bare minimum step in preventing illicit trade and mitigating its impact on the survival of a species.

“Many more national laws can and should be used to their fullest extent,” said Legal Atlas co-founder and legal director James Wingard, “to target all parts of the illicit trade chain; and impose liability on all of the actors involved, from the poachers to the criminal organizations that facilitate the trade.”

When it comes to national laws, however, the report uncovered a lack of consistency in the way countries structure their domestic protected species lists, what types of activities they criminalize, and who can be held liable. All but three countries provide domestic protection to all of their native species, leaving three particular species of gibbon vulnerable to slipping through the cracks in Cambodia, Laos, and Vietnam. Some countries are selective with which non-native species to protect, while three have recently taken the step to include all non-native species.

“Countries like DRC and China are showcasing an area of opportunity for a smarter legal design around wildlife conservation,” said Legal Atlas co-founder and director Maria Pascual, adding that all countries should at least give legal protection to all CITES Appendix I and II native species. And there is a strong argument that they should include non-native species as well—at a minimum, those that are known or suspected of being traded in domestic markets.

The authors focused on offenses related to three critical parts of the trade chain—removal, sale, and advertising—and three culprit groups:

The research found that existing laws often fail to target the biggest culprits of wildlife crime, as well as many of the players along the trafficking chain. This squanders the opportunity to take down the international criminal groups and corrupt people that fuel the trade.

“We don’t treat wildlife crimes with the same sophistication and seriousness as we do other areas of crime,” Pascual said. This is despite the fact that illicit international animal trade is among the most lucrative forms of contraband.

Dealers trafficking chimpanzees, for example, make a thousand times more than the individuals who capture them, partly because transporting live chimpanzees across international borders is a highly specialized activity that requires expertise and high-level connections to the military and government officials who must be bribed along the way.

Legal Atlas also looked at penalties imposed, like fines and prison sentences, and how well they match the gravity of the crime committed and its impact on threatened ape species. 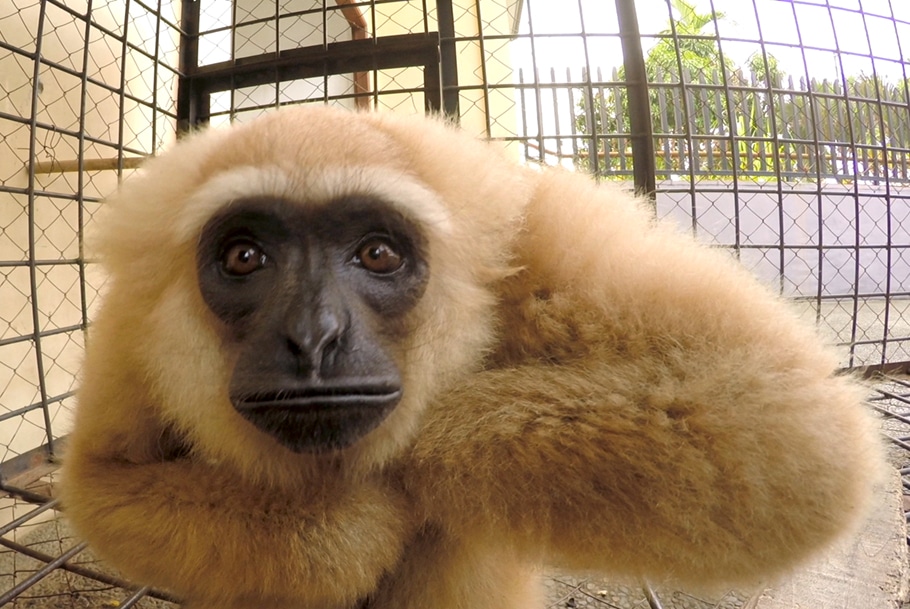 A Lar Gibbon illegally kept as a pet in Indonesia.
©JABRUSON

With thousands of new social media and e-commerce posts about wildlife every day, an additional challenge is the lack of liability or penalties for those advertising the sale of endangered wildlife species online. There are only a handful of countries that explicitly prohibit or regulate online trade in wildlife, while the rest either say nothing or only generally criminalize “trade.”

But “there is lots of variance between countries on what they consider to be trade,” Wingard said. “One might think that online sale would qualify, but it isn’t defined that way, and it needs to be. Online trade is also a specialized area for enforcement with unique challenges that won’t be addressed if it’s just considered another form of trade.”

To start, countries must either broaden their understanding of the concept of trade or “explicitly regulate the advertising of wildlife,” Wingard said.

“But if they’re serious about it,” he said, “more will need to be done.”

Laws are also not usually nuanced in terms of penalties. For example, most countries studied don’t give bigger fines for greater quantities of wildlife trafficked, for repeat offenses, or for the level of extinction facing the trafficked animal.

Similarly, the laws often don’t take into account the level of guilt of the perpetrator. There are few attempts to quantify the damages of the trade and almost no instances where the perpetrator has to pay compensation, as would occur with a person or company found guilty of other environmental crimes like pollution.

How do you tackle the disconnect between the laws and what’s happening on the ground? Having good laws is an important starting point, Pascual said.

And making people aware of them is another, so they can be used or improved.

“We want to bring the laws, which are such a complex matter, into the hands of non-legal specialists—regular people in the field, in management, conservation, and even enforcement,” Pascual said.

Legal Atlas’ next steps are to analyze how these laws are being applied, and to add into the analysis and onto the platform seizures and enforcement data, as well as case law.

Legal Atlas is the co-author with environmental policy analyst Duncan Brack of a chapter on national legislation in “State of the Apes: Killing, Capture, Trade and Conservation,” the forthcoming fourth volume of the State of the Apes series.

“We Can Save the Orangutan. It’s Not Too Late.”