A Rare View of the Forgotten Ape: Documenting Bonobos in Their Natural Habitat

Many of the bonobo images most people have seen show rescued and rehabilitated individuals, who differ from those living in their natural habitats in key ways. Captive bonobos’ tendency to overgroom and familiarity with humans, for example, can result in close-up visuals of great apes looking a little bald and appearing so comfortable around the camera that they ignore it and tolerate documentation of big group scenes.

Award-winning photographer and videographer Bruce Davidson, known professionally as JABRUSON, believes documenting the dwindling, fragmented bonobo populations left in the wild—only in one African country, Democratic Republic of the Congo—is critical to their conservation. That’s why he recently spent almost a month capturing rare glimpses of a wild bonobo group in Lomako-Yokokala Faunal Reserve managed by Institut Congolais pour la Conservation de la Nature with support from Arcus partner African Wildlife Foundation. The community of +/-20 bonobos are being habituated to humans by a team from Antwerp Zoo Foundation (KMDA/AZF) and Congo-based Juristrale to pave the way for future ecotourism endeavors similar to mountain gorilla tourism, which has contributed to conservation progress.

Here, JABRUSON shares highlights of his trip—a physically demanding journey involving private planes, dugout canoes, and motorbikes, plus help from local trackers and researchers, cutting-edge technology, and stores of patience during early morning treks—and reflects on why his work is so important.

You identified this picture as particularly significant. What makes it stand out? 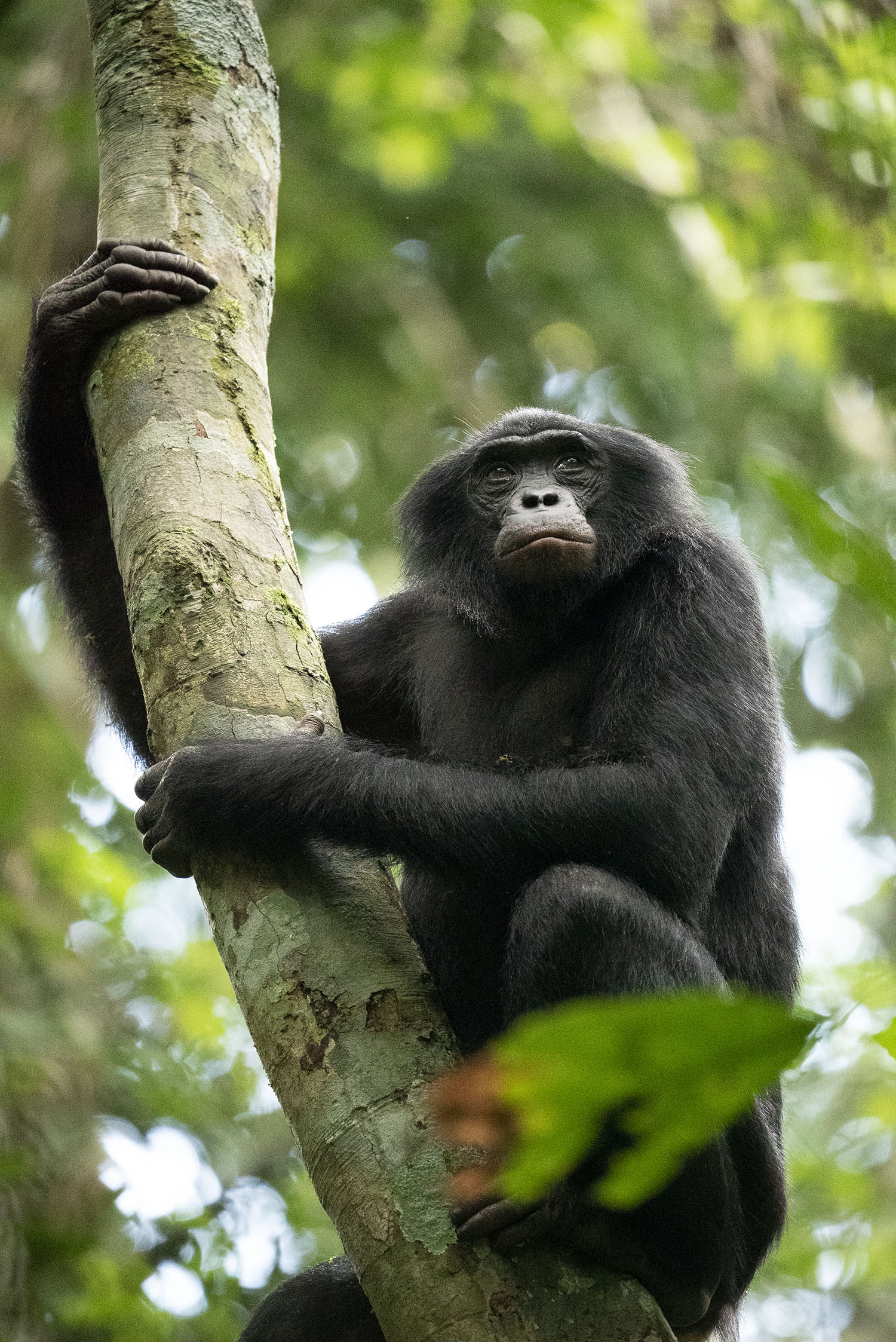 An adult bonobo stops to survey the tracking team while climbing up a tree. ©JABRUSON 2020

It shows that bonobos are very different from chimpanzees. Those sort of wide whiskers that give the funny shape to their face—that’s very distinctively bonobo. For me, it’s the kind of image that I had in my mind in terms of what I needed to try and get.

It’s one of those lucky images you can get while this process is quite new—when an animal becomes temporarily fascinated by a tracker or, in my case, a photographer. As a photographer, that’s the kind of window you’re looking for.


You mentioned documenting elusive species like bonobos is risky, professionally-speaking, because there’s no guarantee you’ll be able to find subjects. Did this factor into the timeline for your project?

As a wildlife photographer, there’s never enough time. But I was very aware on this project that we needed to build up enough time to be able to get what we got. In field, we had about three weeks. It took a bit longer getting in and out, so in all, almost six weeks.

For a film, you’d spend anywhere upwards of a year in the field … and that’s just so you can have a camera in place [to capture] when something unusual happens. Often with animals, it all comes down to luck—being in the right place at the right time. You have to put in the time to have that happen. 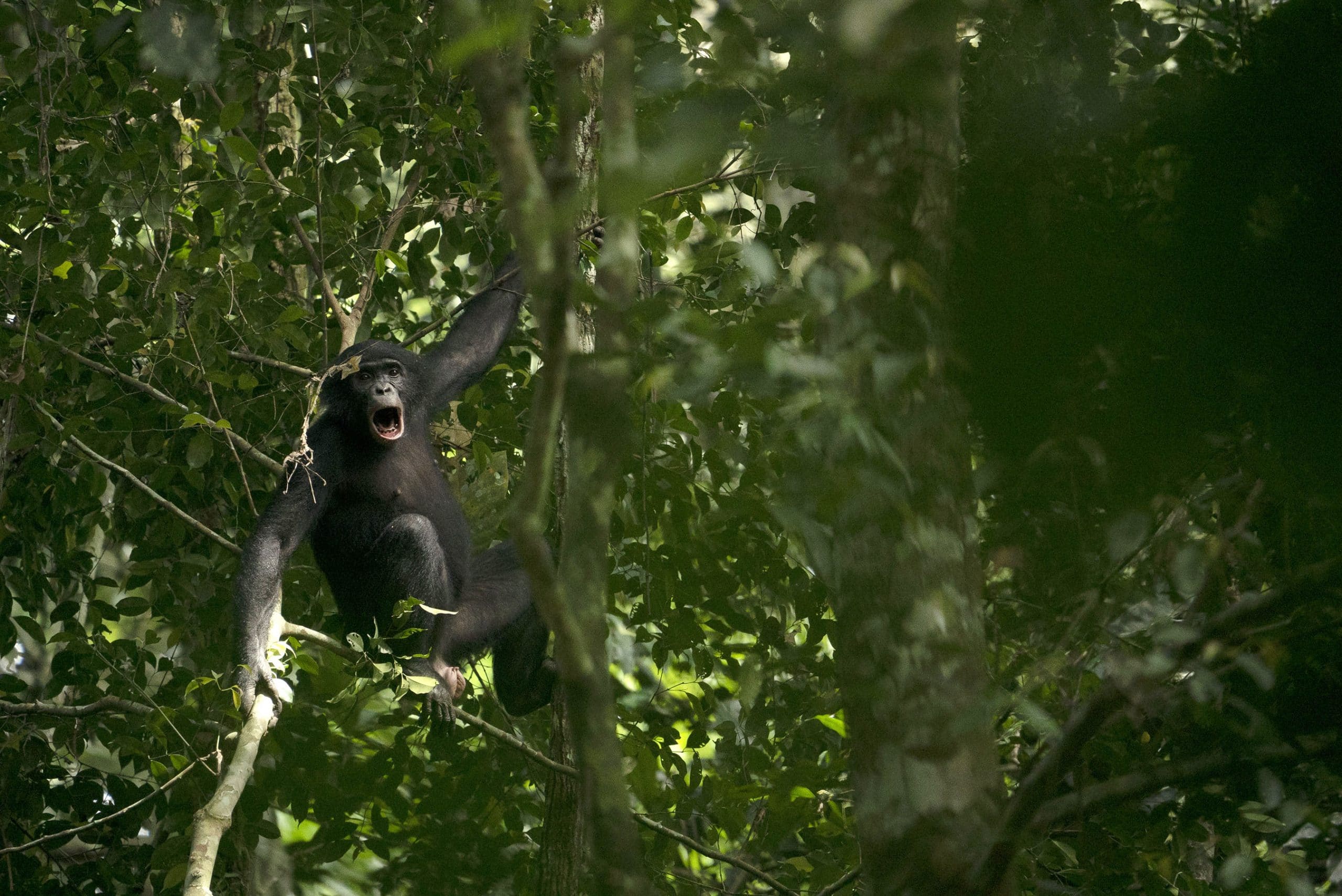 JABRUSON says trackers often have to follow a bonobo group every day for years before the members start ignoring human visitors. This sub-adult (yet to have offspring) female sounds the alarm after spotting the team. “This particular group will probably take five years to get to the point of being fully habituated.” ©JABRUSON 2020

Why did you want to focus on semi-habituated or wild bonobos versus ones who have been rescued, rehabilitated, or released into protected environments by organizations like Amis des Bonobos du Congo (ABC) through their operations at Lola ya Bonobo and Ekolo ya Bonobo?

The downside of working at Lola and Ekolo ya Bonobo is that many of the photographs that exist of bonobos all over the world come from here—that’s what most people have already seen.

In fact, a lot of people think all bonobos are bald because many of the photographs they’ve seen were taken at these locations. In captivity, bonobos tend to overgroom key group members like alpha females to the point they appear bald. 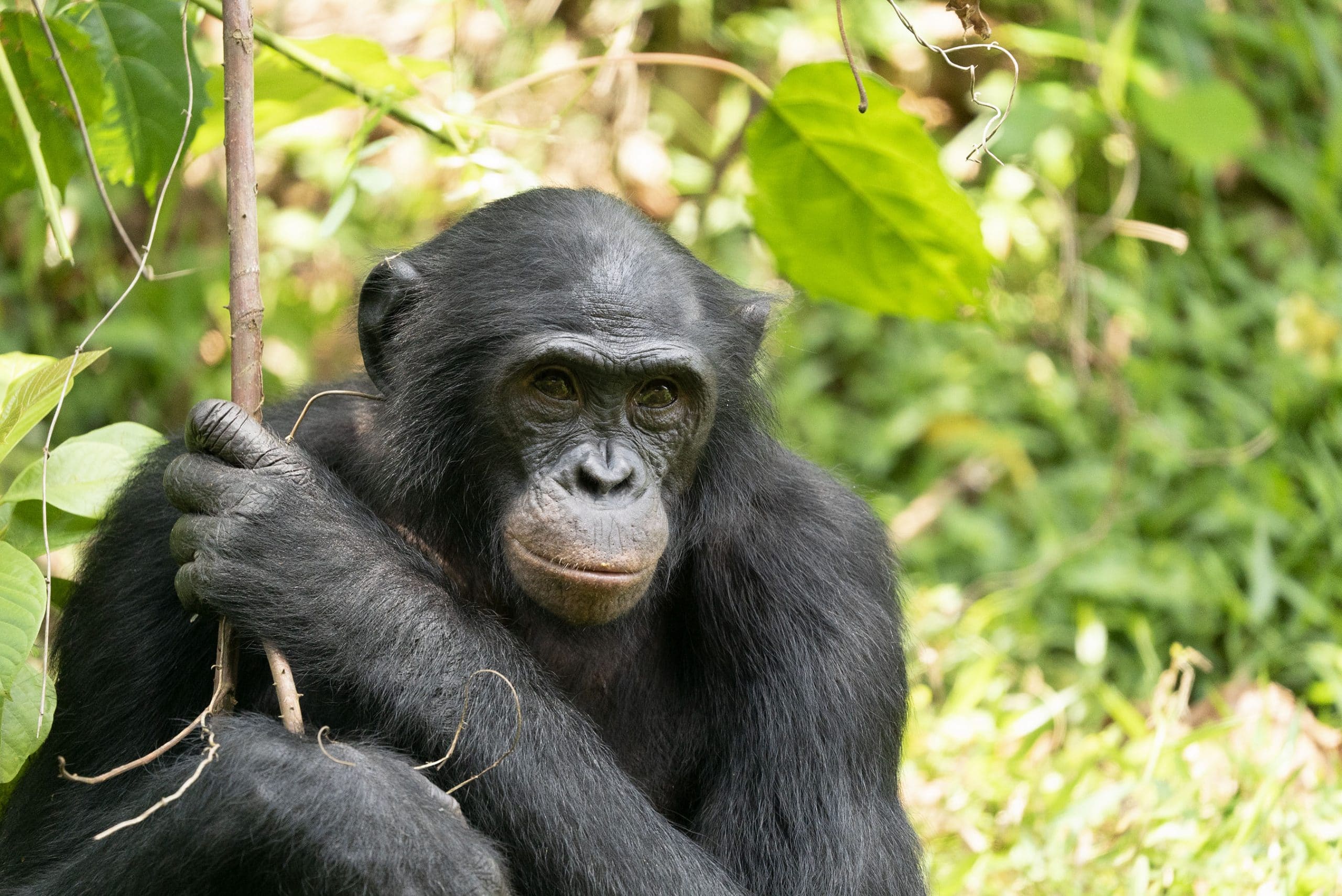 Pole, a male bonobo born at Lola ya Bonobo, the world’s only sanctuary for orphaned bonobos. ©JABRUSON 2020

You don’t see pictures of semi-habituated or completely wild bonobos very often—that’s why I concentrated on them. And that, in fact, is primarily the success of the project. 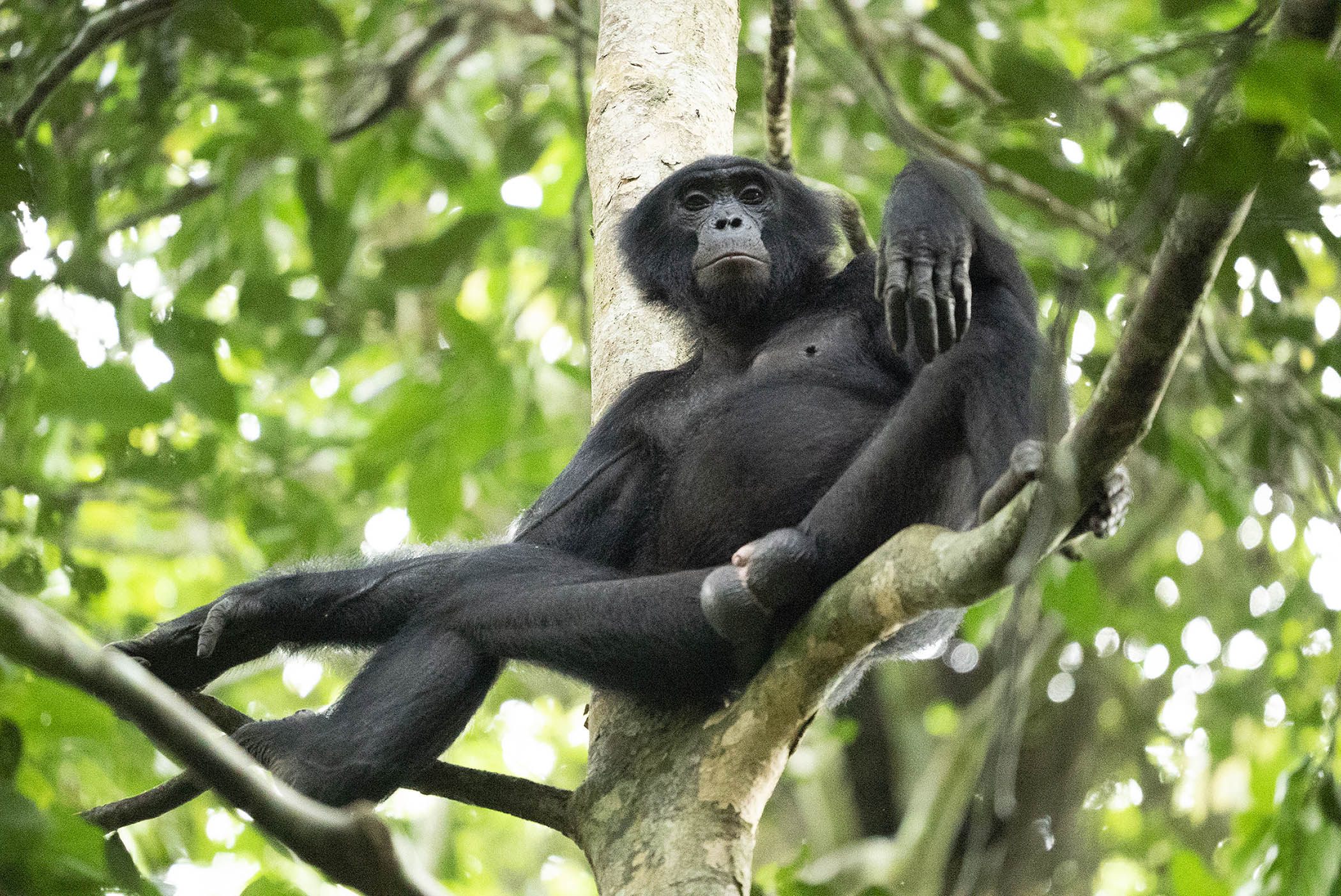 JABRUSON says images like this one of a highly confident male are a sign ecotourism efforts similar to gorilla tourism projects could work in Lomako-Yokokala. “The end goal is to protect bonobos but also empower the local community.” ©JABRUSON 2020

Did your experience documenting wild bonobos teach you anything new about the species or the threats facing them?

They’re very intelligent. They might well be looking at you, but they’re also thinking. They’re not just staring at you blankly.

I think that’s a mistake a lot of people make with wild animals—they don’t appreciate that, just like with a human, they’re constantly thinking about things, making calculations and trying to figure out if they can push this boundary or that boundary. 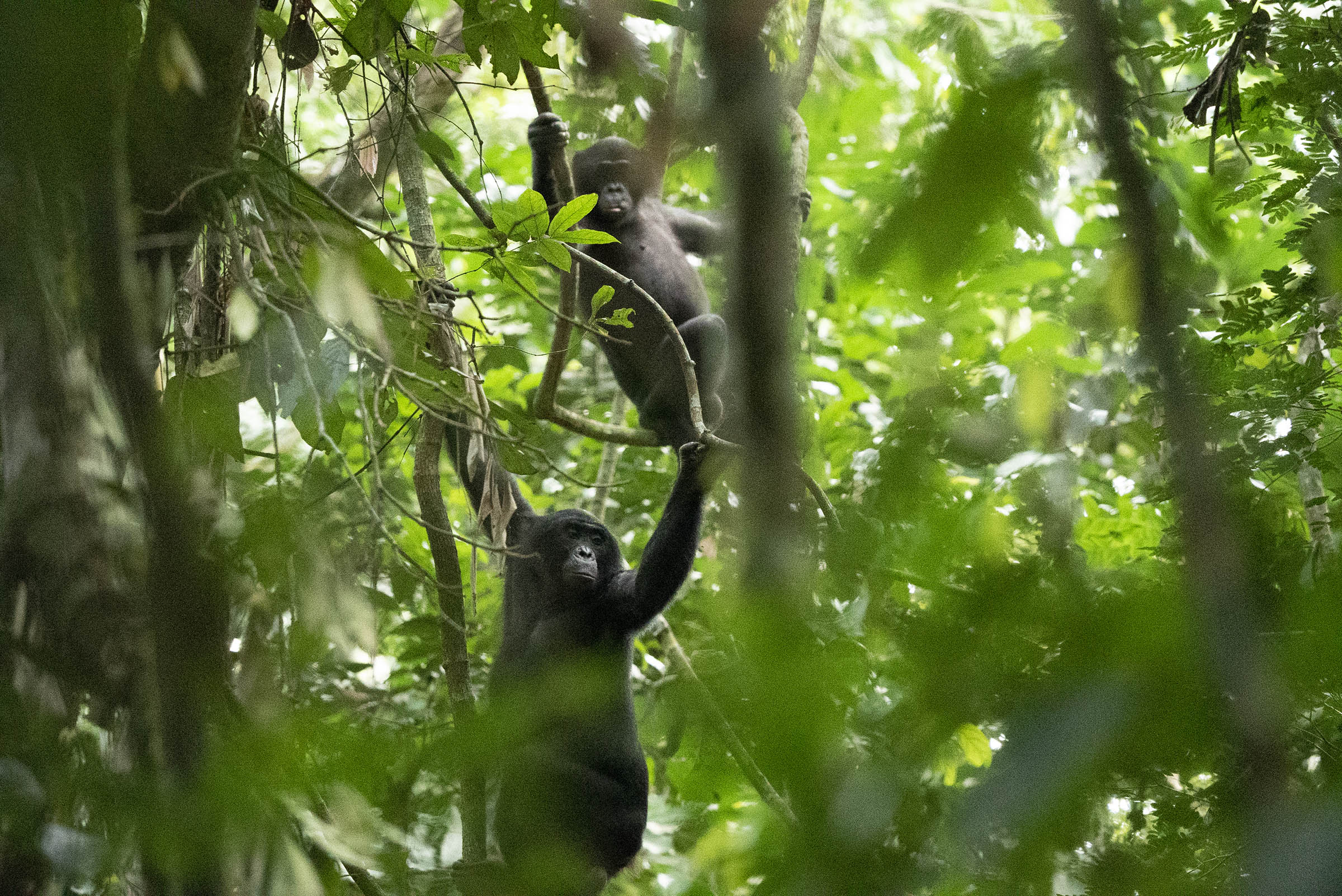 JABRUSON says that for bonobos, the mother-infant bond lasts well beyond infanthood, as displayed by this photo of an adult female together with her sub-juvenile offspring and newborn hidden from view. “It’s like with humans, you know, the 15-year-old sister is still there even though there’s a 1-year-old sibling who’s new to the family.” ©JABRUSON 2020

From a mission like this, you [also] realize just how vulnerable they are. They’re so totally isolated and anchored into a specific part of the African continent … in one of the most volatile countries in Africa.

You also become very aware that if something goes wrong there, they could disappear forever. These tourism efforts will not just provide new information about bonobos; it will also help educate people on the values of not eating bonobos … to stimulate ideas of other ways people can live with them.

What do you think will be the legacy of this project?

Bonobos are really important great apes, so it’s wonderful to feel that a conservation organization has multimedia records of this [work]. Often, lots of money will go into the conservation of a species, but hardly any resources have been put into documenting and recording it for the long term. And once the funding finishes, if you don’t have a visual record, you’ve got nothing to show for it. 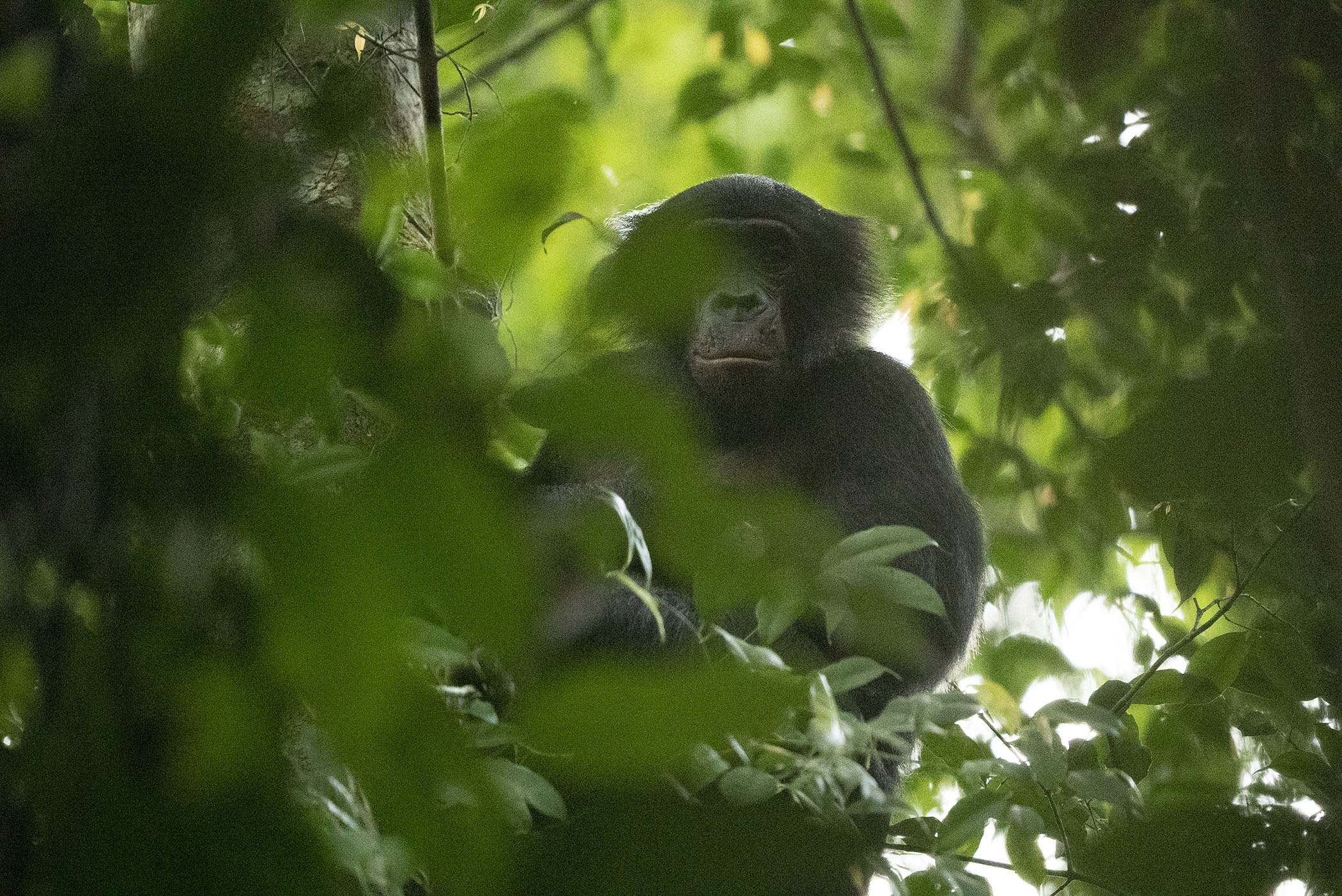 Advances in sensor technology and a low-light camera allowed JABRUSON to capture bonobos in their prime—at dawn or just before it. “Even five years ago, I would have lost about 80% of the images we got,” he says. “They would have just never turned out.” ©JABRUSON 2020

That’s where Arcus’ media library is incredibly valuable—because in 50, 100, or 200 years, it’s still there for future generations to check and see how it was and how it should be. And suddenly, you have a resource that targets the very people who need to use it and are often the people not catered for by high-end [commercial media] libraries.

It’s the same when a commercial broadcaster makes a film: They rarely put media materials back into the hands of those working in the field, and if you participate in the making of commercial wildlife film, it’s very rare you ever get to use the media materials yourself. That’s what makes our kind of project so good, because [the visuals] are coming back to the very people who made it possible to do the conservation in the first place.

Editor’s Note: Habituating apes for tourism or research means they lose their fear of people. As a result, they can become vulnerable to hunting, conflict, and disease. Ecotourism projects therefore require a long-term presence in order to ensure protection of the habituated animals, and should follow the IUCN Best Practice Guidelines for Great Ape Tourism.

What’s in a Name? Why “Endangered” Label Doesn’t Put Mountain Gorillas in the Clear

“We Can Save the Orangutan. It’s Not Too Late.”